60 WEEKS WITH THE JUSTICE LEAGUE: Week 9 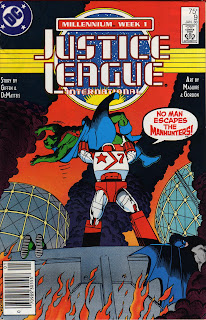 
Despite being a tie-in to a crossover event that I ignored at the time and continue to ignore now--and despite the way-lame cover--this was probably the most exciting issue yet of this incarnation of the Justice League. Consider what happens:

Rocket Red reveals he is a Manhunter: 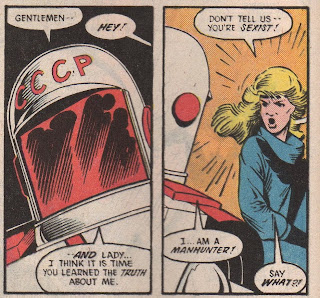 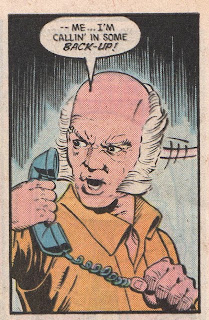 Pelé organizes the official Tang soccer team, which went on to not make it to the 1990 World Cup : 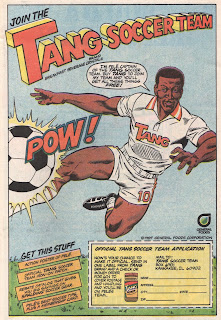 Mr. Miracle quotes every character from Star Wars at the same time: 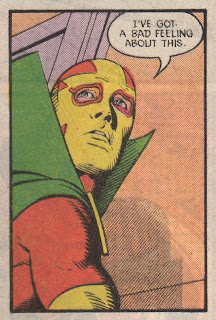 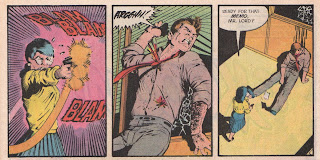 On the other hand, the backup story--which reveals that Bialya’s Colonel Rumaan Harjavti is trying to organize his own super team, starting with the Global Guardians’ Jack O’ Lantern (and which, despite the title, has nothing to do with the David Lean film)--plays kinda like this panel stretched out over six pages: 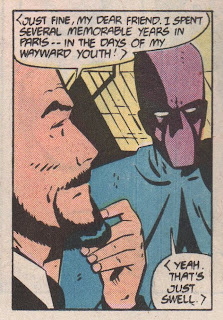 ANYTHING IS EVERYTHING ELSE #6

When Jon D. W. sits down to draw--always with pencil, often with pen, and only with blood, sweat and tears in a metaphorical sense--he dives deep into the ocean of ideas and influences swirling throughout his brain. The result: these one-page idea pieces known as Anything is Everything Else! 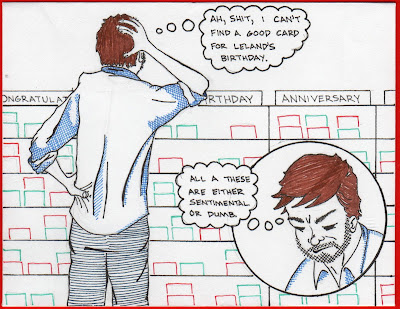 Experimenting with a bit of color here, albeit a limited palette. At the end of the day, I think I'm still more of a black-and-white kinda guy.

Bonus fun fact: This is the actual envelope (or at least a scan thereof) I wound up giving my buddy. What card was inside? The world may never know...

All contents this post copyright Jon D. Witmer/The Danger Digest.
Posted by Unknown at 6:00 AM 3 comments:

60 WEEKS WITH THE JUSTICE LEAGUE: Week 8 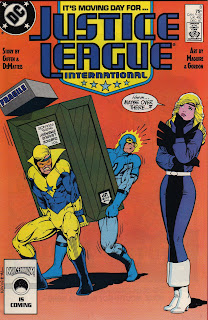 
The main story in this issue is kinda like an episode of Our House, in which J’onn plays the Wilford Brimley role. As such, it’s pretty terrific. Especially when Blue Beetle and Booster Gold--sans costumes--share Chad Allen’s part, shirking their duties at the new Paris embassy in favor of trying of pick up some French ladies. 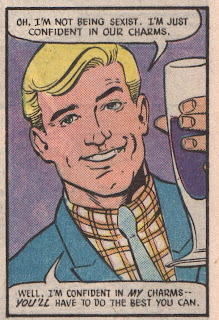 Eventually, the whole band comes together for what looks like happy hour, which Oberon cuts short in order to alert the League to its first internationally sanctioned mission. Apparently, said mission will unfold in the Millennium crossover series, which I won’t be reading. Here’s hoping issue 9 makes sense anyway.

Following the issue’s front story is a six pager focusing on the Global Guardians, who have been stripped of any real power following the U.N.’s sanctioning of the JLI. Really, though, I’m sure they’d all get along just fine, since the Guardians, like the League, seem mostly interested in interpersonal sniping. Good fun, and I dig Giffen’s pencils. 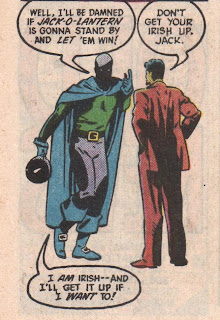 60 WEEKS WITH THE JUSTICE LEAGUE: Week 7 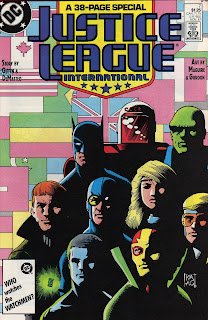 
So, the whole Gray Man storyline from the past few issues was essentially a waste of time, as apparently Doctor Fate could have put the kibash on his shenanigans at any point. But whatever—only 6 of this issue’s 38 special pages is dedicated to wrapping up that storyline. What happens then, you ask? Well, sit back and enjoy this show and tell… 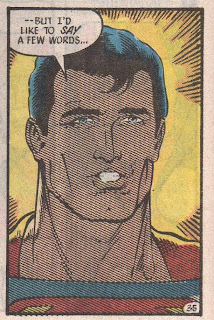 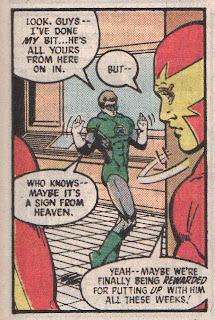 Guy Gardner gets a new ‘tude! 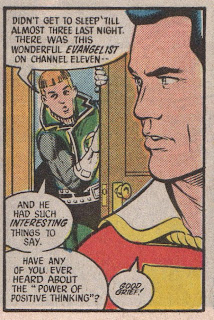 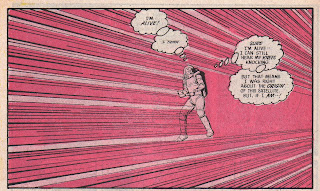 Also, in no particular order: Doctor Fate and Captain Marvel leave the team, Captain Atom and Rocket Red join, the League is officially sanctioned by the United Nations, and the book’s title change results in a logo I find somewhat less attractive than the one on issues 1 through 7. 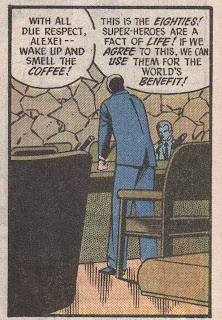 Jon D. W. throws down a good bit of his hard-earned cash on comics. Here, he spills the beans on whether or not it was worth it. But to paraphrase LeVar Burton, don’t just take his word for it--you should read comics, too.

This collection, assembled in 2004, features a story each by Steve Bissette, Alexander Grecian, Paul Winkler, Jakob Klemencic, Matt Madden, Neil Gaiman, David Lasky, K.Thor Jensen and Ald Davison, and was an incredibly inspiring read before my last go at the 24-hour challenge. (Of course, comparing my work to what’s collected here after I did my comic can be a bit depressing.) For anyone who wants to make comics in general--even if it does take more than 24 hours--seeing these pages, all of which burst with love for the medium, should make you want to put pen to paper straightaway. Also, in case you missed it in the list: Neil Gaiman.

Collecting a four-issue Vertigo miniseries from 2008, this book partners Pekar with a terrific group of artists, including such American Splendor stalwarts as Gary Dumm and Greg Budgett. (Of the lineup, I was probably most thrilled to see Rick Geary’s take on Pekar--it’s a match made in comics heaven.) To borrow from the cover of Pekar’s self-published American Splendor #5 (1980), this book mostly contains “stories about sickness and old people,” but humor prevails even as Pekar faces the quotidian and banal with an increasing diplomacy. Granted I’m a good deal younger than Pekar, but American Splendor has long helped me make sense of everyday life, or at least reassured me that I wasn’t alone in the human condition; this chapter in the continuing saga fills me with hope for all the years to come, both for Pekar and for myself. 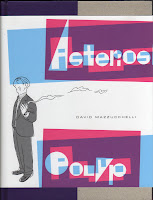 A lot has already been written about this book, and rightly so--this work needs to be discussed, and I can’t imagine anyone reading it and not wanting to talk about this masterpiece of sequential art. To guide you through some of the early comics criticism surrounding this book, I’ll point you to Ng Suat Tong’s roadmap, put together for The Comics Reporter. Tong likens aspects of the book to Scott McCloud’s Understanding Comics, and I would agree that reading Mazzucchelli’s tome for the first time reminded me very much of the feeling I had after first finishing McCloud’s treatise: I was humbled, I was moved, I was awed and utterly inspired by the limitless possibilities of comics. This book is absolutely a must-read.

THE COMPLETE MAUS
By Art Spiegelman

I know I really should have read this long before now, but for anyone else who’s had that thought, I urge you not to let it stop you from picking up this book. Spiegelman’s work--at once universal and painfully personal--is an absolute triumph, even as it lays bare the very worst of humanity. This tale of survival is revelatory in its ability to present the human spirit in deceptively simple words and pictures. Maus is, without question, one of the finest works, in any medium, that I have ever encountered.

The end of this dark and twisted tale might be a bit too Tyler Durden/Fight Club-y for my usual tastes, but the nightmare atmosphere is so enveloping--inviting, I would even say--that the end makes a sick kind of sense and took me willingly as I read. The formal layouts, with three evenly sized rows to each page, play counterpoint to the story’s chaos, a whirling mashup of strippers, butchers, mobsters and Chester Gould. Yeah, it’s trippy. Yeah, you should read it. And everything else Brubaker, Phillips and Staples do together.

It’s the first half of Law & Order (before the cases go to trial and Sam Waterston strolls onscreen), but with Batman creeping in the shadows. And the dynamic between Batman and Gotham’s finest is utterly fascinating and too little explored outside of this title. It’s taken me awhile, I realize, to get around to this series, but it strikes me now as maybe the best Bat-book I’ve ever read, and its success lies in its focus on “real” people, sans powers, just trying their damnedest to do a job that can itself seem damned from the get-go.

The actual Gotham Central story here is every bit as good as that in the previous volume, but the two opening stories are rather unattractive in this book. I appreciate having Renee Montoya and Two-Face’s backstory right here at my fingertips, but the art (originally from Batman Chronicles and Detective Comics) is so wildly far afield from the grit, soot and dank Eisnerspritz of Gotham Central that it’s actually jarring to flip to the first two stories. Anyhow, the real meat of this volume is an absolutely moving story all about the ties connecting heartbreakingly lonely people.

It took me almost two years to make it all the way through this book. That said, I’m glad I did it, and I’m glad to have this on my shelf, ever ready to be referenced. But wow, these stories can be a real plod. It was awesome, though, when Iron Man fought The Uncanny Unicorn (the adjective having not yet been bogarted by the X-Men).

Look, I know: This book is just another way for Marvel to eke a few more bucks out of their loyal readers’ pocketbooks. But I’ve got sort of a developing habit of writing about ol’ Shell Head for a certain publication, and so I picked this up for “research purposes.” As a showcase for some of the different, specialized armor the character has worn over the years, the book doesn’t offer much in the way of a cohesive reading experience. (The afterword with Bob Layton has some embarrassing typos, too, that I would hope Marvel will correct for any future printings.) The Denny O’Neil-scripted story in which Iron Man fights Iron Monger is interesting in being so dull and yet so important to the plot of the first film. If you really love Iron Man, it’s a fun book to read. Otherwise, probably not so much.


All images copyright their respective publishers. Text copyright Jon D. Witmer/The Danger Digest.
Posted by Unknown at 6:00 AM No comments:

60 WEEKS WITH THE JUSTICE LEAGUE: Week 6 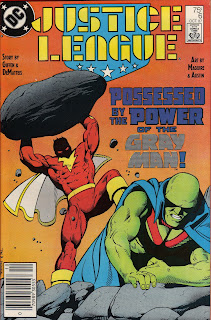 
Okay, so the format here’s been jumping around a bit these past 6 weeks, and having paused for a moment of reflection, I’ve decided to slim this column down and make it something of an exercise in pithiness. Streamline 2009, as they say. 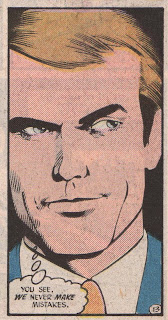 Picking up right where issue 5 left off, this issue begins with the Creeper leading the League into Stone Ridge, Vermont, which has become a physical manifestation of the Gray Man’s blues, so to speak. Speaking of the Gray Man, he possesses Captain Marvel for a fight scene that’s pretty well summarized on the cover, before Doctor Fate finally decides to flex his mystic muscles and clean house, taking himself, ol’ Gray and most of the League into another dimension, and thereby providing this book’s cliffhanger ending. 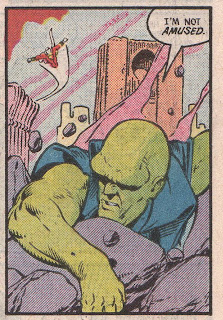 The book was once again a good read, with increasingly well-executed interactions among the team members and with continuingly stellar art from Maguire and Gordon. However, Fate’s actions at the end of the book are straight up deus ex machina. Granted, I don’t know how things are gonna shake out in this other dimension, but if all he had to do was snap his fingers and take the Gray Man away, why did he wait for Stone Ridge to go all to hell? There'd better be some explanations in issue 7. Otherwise, it’s time someone takes Fate’s badge (or amulet, or whatever) away.

On a lighter note, the letters page ends with this add, which amuses me to no end:

That's right, boys and girls--know him. Know him well.

Indy Comic Book Week is coming up December 30, which sounds like it's a ways off, but will definitely be here before we know it. If you've got a comic of you're own you want to share with the masses, or if, like me, you just want easier access to such books, Indy Comic Book Week is for you. So please, start talking it up to your favorite comic shops straightaway.

All the pertinent info can be found at the official Indy Comic Book Week website and blog. Have at it and huzzah!
Posted by Unknown at 2:43 PM No comments: