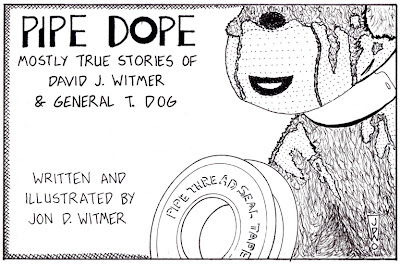 
Welcome to the beginning of Pipe Dope, the webcomic project I've been alluding to in recent months. With a bit (or, more likely, a lot) of luck, this will update every weekday through January 2012, a schedule that will force me far, far outside of my comfort zone and, after a year, will have seen me create some 260 illustrations. I'm not going to bore you in this post with story details; all you really need to know at this point is in the panel above (i.e. "mostly true stories of David J. Witmer [my dad] and General T. Dog [the 'T' stands for 'The']"). From time to time, I'll also (on weekends, most likely) post some behind-the-scenes peeks at the process of creating Pipe Dope. And unrelated to Pipe Dope, I'll also still occasionally jaw about other comics I've been reading with more "Bag It and Board It" posts; again, when those post, it will be on weekends so as to not interrupt Pipe Dope's flow.

Thanks for reading, I hope you enjoy, and if you like what you see in Pipe Dope, please, please, please pass the link on to other people. The adventure continues tomorrow. Yo-ho!
Posted by Unknown at 6:00 AM No comments: 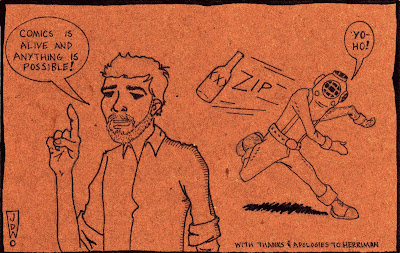 Formerly (albeit only briefly) the banner at the top of this blog, but still and always our official motto. Yes indeed, comics is alive, and in comics, anything is possible. I recently replaced this banner during a bit of redecorating in honor of Pipe Dope, which officially (finally!) begins tomorrow. Please come back and check it out!

Email ThisBlogThis!Share to TwitterShare to FacebookShare to Pinterest
Labels: Meta 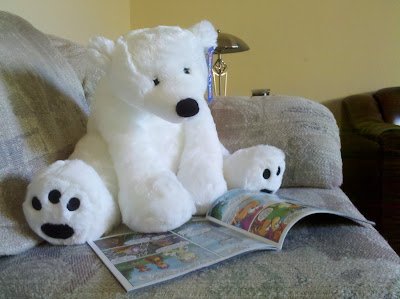 --and you should, too. Especially Fraggle Rock from Archaia, the second volume of which kicked off last week. If you haven't already, treat yourself right and pick it up at your local comics shop. And then be back here this coming Monday--January 31--for the launch of The Danger Digest's new webcomic, Pipe Dope!
Posted by Unknown at 6:00 AM 2 comments: 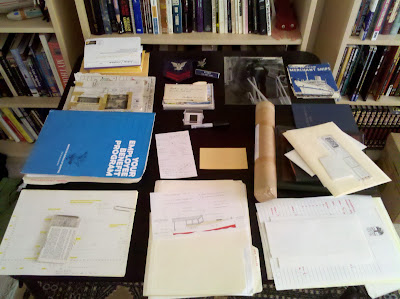 12 days and counting, dear readers, until the launch of my oft-mentioned webcomic, which will be presented right here on the good ol' Danger Digest blog. And for those of you mathematically inclined, you might note that 12 days from now is a Monday--not a normal day for me to post. Please believe it: Things are gonna get crazy here, with the webcomic's first installment coming on Monday, January 31 and the second installment landing the very next day. In other words, I've got my work cut out for me. Back to it, then. Yo-ho!
Posted by Unknown at 6:00 AM 2 comments:


I ain't crazy about flying, but I do appreciate how much reading I can get done on a plane--and while waiting in airports. This past holiday season, with its trip back to my hometown just outside of Cleveland, afforded me an opportunity to get through, first, the first two volumes of Y: The Last Man, a series I've been meaning to dig into for years. I don't have much to say on the subject just yet, other than I enjoyed the first book and thought the second volume was far better yet. Yorick, the eponymous "last man" on earth, is almost off-puttingly immature at times, but I suspect watching him grow will make the series as a whole feel that much more satisfying.

The flight back to Los Angeles from Cleveland gave me a chance to read the first two of three trades collecting Mike Allred's most recent Madman work, this time published through Image Comics. I've long been a fan of both Madman and Allred, but I've gotta say, this just might be my favorite Madman work yet--and I was shocked to discover I felt that way. Allred does a crazy lot of experimenting in these books, and while not every result thrills me, I do love it that he's consistently swinging for the fences--and knocking it out of the park more often than not. In terms of both style and story, these are the craziest Madman books yet, and the first trade is a perfect jumping-on point even for someone with no prior experience with the character. Both books also offer a wealth of back matter that gives added insight into Allred's mad-science techniques. Highly recommended and, above all, ginchy!

Last but not least--and actually read before the holiday travel--is Drew Weing's Set to Sea, an absolutely beautiful book filled with incredibly rich illustrations. The crosshatching is nothing short of awe-inspiring, and the attention to detail tremendous, with a highly developed and yet subtle awareness of light and shadow. The hardcover from Fantagraphics is wonderfully put together, but if you want a sample before taking the monetary plunge, you can take a look at a number of the pages at Weing's website.
Posted by Unknown at 6:00 AM No comments:

Email ThisBlogThis!Share to TwitterShare to FacebookShare to Pinterest
Labels: Bag It and Board It, Madman, Madman Atomic Comics, Set to Sea, Y The Last Man

Apologies for not posting last Wednesday--the only Wednesday I missed in all of 2010! I'll be trying to make up for my neglect in spades this year, with (hopefully, kinda, sorta) regular Wednesday postings through January and a barrage of my own comics through the rest of the year after that. Anyway, here's hoping...

In the meantime, to help us ease our feet back into these dangerous waters, enjoy this small sampling of the comics I pulled out of boxes in my mom's house in Ohio this holiday season and brought back to California to be read and enjoyed all over again! 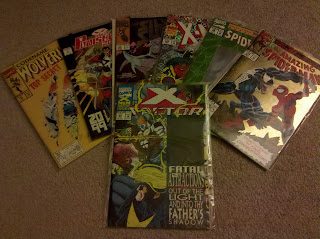 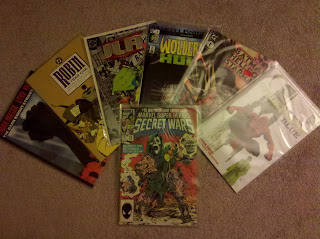 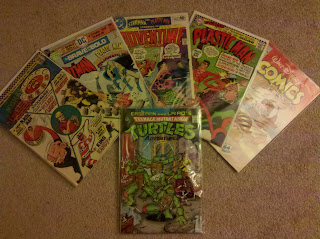 Email ThisBlogThis!Share to TwitterShare to FacebookShare to Pinterest
Labels: Bag It and Board It, Memories from the Longbox
Newer Posts Older Posts Home
Subscribe to: Posts (Atom)