60 WEEKS WITH THE JUSTICE LEAGUE: Week 3 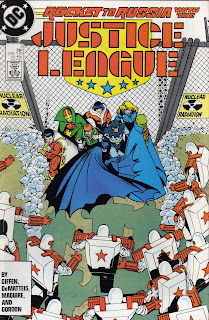 
As did issue 2, issue 3 ends with another would-be letters page commandeered by editor Andrew Helfer. I give him credit for emphasizing the important role of the inker, letterer and colorist, but when he writes “Gene is one of the few guys that can take characters of fifty different colors and find a background color that NONE of theme fade away against,” it really seems to diminish the thoughtfulness and artistry that goes into good coloring and, indeed, is evident in D’Angelo’s work. Perhaps more illuminating is Helfer’s quick run-through of the creative process behind this book:

“Mr. Giffen plots the story first--that is, he sits down with the editor at regular intervals (usually once a month) and figures out the events that will take place in any given issue. This includes both major plots, subplots, character ‘bits’ and anything else the plotter cares to toss in. Usually, the average writer will then hand in a typed, page-by-page breakdown of the story, which the penciller will then illustrate; in Mr. Giffen’s case, an uncontrollable fear of typewriters (or maybe just their ribbons) forces him to produce his plots as a set of mini-pages, which acts as a layout ‘guide’ for the pencil artist [….] Once the page is penciled, the entire package is shipped off to the scripter, who dialogues the pages based on the plot.”

Helfer goes on to explain scripter J.M. DeMatteis’ late arrival to the title; apparently the plotted and penciled pages for the first issue sat for some time before DeMatteis was officially on the book and writing the dialogue, which in turn slowed the inking process, requiring Al Gordon to take over responsibilities from Terry Austin. To my mind, even though this essentially describes the now-antiquated “Marvel Method,” when two writers are involved, it opens the door for a disconnect between the art and text such as is seen on page 12:

If the man in the red suit is the first to recognize the danger, his expression in the fourth panel seems redundant at best and awkward or downright inconsistent at worst. My suspicion (and it is only a suspicion) is that DeMatteis’ script changed the action Maguire penciled from Giffen’s breakdowns; it looks suspiciously like the workers seen in the first two panels realize the danger when the screen illuminates in panel three, and the man in the foreground of panel four is the only one who voices the reality these players are all suddenly made aware of.

But I’m getting ahead of myself. Sticking with the art for a moment but jumping back to the book’s cover, I feel this issue is a definite improvement over issue 2, but it still falls short of the bold standard set by the series’ first issue. All the same, I very much respect the composition, with the title itself pointing to our heroes, who are further caged by the fence (made to look even more threatening thanks to the illustration’s perspective) and the encircling Rocket Red Brigade.

The 22-page story itself plays out pretty straightforwardly: Colonel Harjavti convinces Wandjina, Silver Sorceress and Bluejay--the three aliens who have come to Earth to destroy the planet’s nuclear arsenal and prevent the type of global cataclysm that left their home world a lifeless husk--to remove the Soviet Union’s warheads, leaving the Justice League no choice but to breach Soviet airspace and risk an international “incident” to stop the trio.

Inside Russia, the team is stopped by the Soviets’ super-guardians, the Rocket Red Brigade, and airborne fisticuffs naturally ensue. However, with so many super-powered folk flying around uninvited, Russia’s nuclear infrastructure goes on high alert, and when the nuclear power plant from page 12 improperly shuts down, the Rocket Reds are forced to seek the League’s assistance in preventing a core meltdown.

Arriving at the plant, the general consensus is it’s too late to do anything, until Wandjina flies into the belly of the beast, apparently sacrificing himself to save the day--an act of heroism the rest of this cast seems incapable of performing. (Granted, I can appreciate that it’s bad for business to kill Batman--oh, wait. Anyhow, back in ’87, it wasn’t so easy for DC’s characters to return from the dead.) 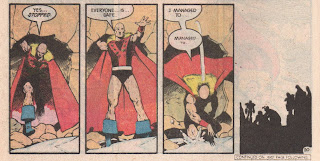 Kicked out of the Soviet Union as soon as the crisis has been averted, the JL returns to headquarters, where they find the enigmatic Maxwell Lord waiting with the League’s “newest member,” Booster Gold. 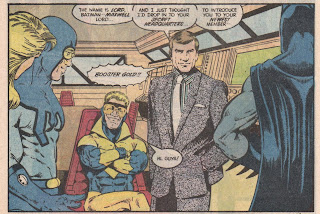 Lord also factors into the middle of this book, when he makes a phone call to Gorbachev himself (or at least his cartoon counterpart) in order to smooth over the JL’s intrusion into the U.S.S.R. 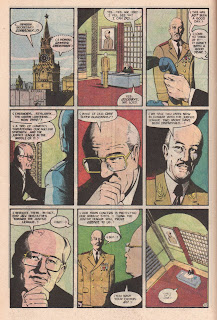 Over this series’ first three issues, I dare say Lord’s behind-the-scenes moves have been the most interesting--or intriguing, anyway--story beats, and I’m hopeful that his stepping out of the shadows will pay dividends over the next few (or, ideally, more) issues.

It’s certainly noteworthy that thus far, the League has spent most of its time either fighting amongst itself or chasing after three aliens whose mission was essentially righteous. It’s a sign of the times that the Cold War takes such a front seat, and it’s significant that Reagan is frequently name-dropped and Gorbachev actually makes an appearance. This iteration of Justice League began its run roughly a month after Reagan addressed the nation regarding the Iran-Contra affair, and only a year and a half after the Challenger tragedy. It’s disingenuous, of course, to say that in 1987 the world seemed decidedly real, but for whatever reason, the “real world” was invited into the pages of our four-color entertainment. (In truth, this could well have to do with the aftermath of DC’s epic Crisis on Infinite Earths: After decades of multiple Earths existing across the dimensional planes, the company wanted its readers to know that the One World that remains is very much Our World.) 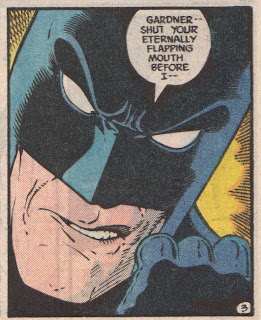