TWO YEARS GONE BY or: Of Things Pelagic, Pt. 2 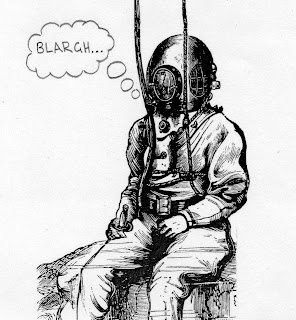 It’s hard to believe it’s been just shy of two years since this blog began. In that time--well, honestly, not much has happened. I like to think The Danger Digest’s course stayed true for at least a few months while I actually wrote about comics, as I originally said I’d do, but then of course there were some real droughts, and when content actually sprinkled back in, comics weren’t even mentioned. First, there were a handful of movie reviews by yours truly, but my plate was full with my responsibilities at American Cinematographer magazine, which after all is enabling me to pay the bills. Eager to keep something shaking here on this site, I passed the keys to the kingdom over to my esteemed colleague, Augie Deutsch, but of course his career has taken off and he’s now in hot pursuit of The Big Story in some far-off corner of the globe, or potentially even the galaxy. (All the same, Augie, wherever you are, thanks for your phenomenal contributions; you’re welcome back to The D.D. anytime.)

So here we are, two years after it all began, and nigh on a year since anything’s been posted. Well, rest assured I’ve taken the ticking clock as a kick in the pants and a clarion to give this site the attention I know in my heart of hearts it deserves. There’ll be changes, to be sure: Most notably, I’m hoping to steer this site back to being a launchpad for The Danger Digest webcomic, which two years ago I said was going to be unveiled within six months, but now I honestly think it’s on its way. Even more shocking, I’m tossing in my Luddite street cred and giving The D.D. a presence on both Twitter and Facebook, with the former already up and running, and the latter coming soon. (Seriously!)

Like all things worthwhile, this is meant to be an adventure, and those rarely go according to plan. So brace yourselves for whatever lies ahead. Yo-ho!
Posted by Unknown at 2:13 PM No comments: