60 WEEKS WITH THE JUSTICE LEAGUE: Week 2 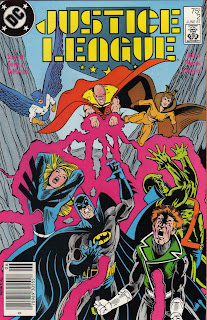 
Picking up the day after the events of Justice League #1, “Make War No More!” throws the reader headlong into late ‘80s Cold War politics as only a comic book of the era could, with the introduction of a galaxy- and dimension-spanning trio of “heroes” who have tasked themselves with ridding the universe of nuclear weapons, the likes of which destroyed their own home world. First things first, though: Batman has to be an insensitive dick.

Despite Dr. Light’s help taking down the terrorists at the U.N., Batman’s peeved that she’s in possession of a signal device of unknown origin, and he’s determined to figure out from whence it came. His interrogation of the good doctor takes a coffee break when Blue Beetle calls the gang around the TV for the latest episode of Jack Ryder’s Hot Seat (misspelled “Rider” in one panel). The TV-screen panels certainly owe a debt to Frank Miller’s serious (some might say “decadent”) The Dark Knight Returns, to which this series’ comedy stands in response. 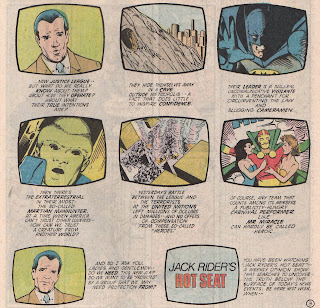 Beetle and co. aren’t the only ones enjoying the show: Ryder’s commentating serves as an “aural” bridge to the mysterious Maxwell Lord’s one and only page this issue. A potent page it is, though, portending of things to come as Lord welcomes Booster Gold into his office.

Following the Ryder episode, two pages reveal the whereabouts--metaphysical though they may be--of Dr. Fate, who up and disappeared during the first issue. It seems trouble is brewing with the Gray Man, and Fate pays a visit in an effort to keep the old-timer in check.

Page 8 takes us to that smallest of nuclear powers, the backwater country of Bialya, nestled somewhere in Eastern Europe. There, the Silver Sorceress, Wandjina and Bluejay have arrived to send the small nation’s nuclear arsenal into another dimension. Apparently successful in their mission, the three are welcomed by Bialya’s scheming leader, Colonel Rumaan Harjavti, who entices the heroes to make camp with him, and by issue's end directs their attention to the U.S.S.R. 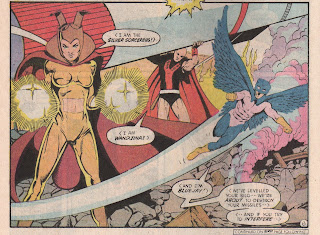 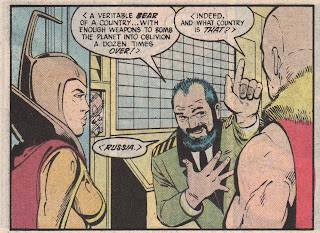 By way of a two-page flashback, the creative team explains that these three characters hail from a world surprisingly like our own, only one that finally teetered over the brink and into nuclear Armageddon. In fact, the parallels between the worlds are so pronounced (beyond even a common species and language) that these three survivors mourn the loss of Captain Speed, “the fastest man on two legs,” which would have rung a number of bells back in ’87, not too terribly long after “the fastest man alive,” Barry Allen, lost his own life. 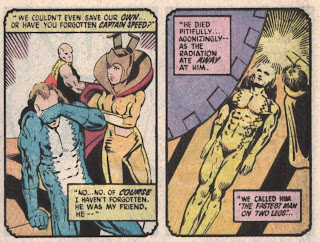 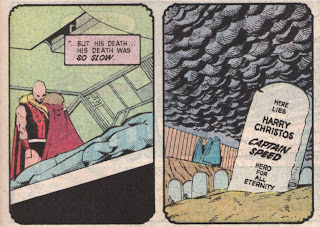 Thanks to a newscast, the trio’s actions finally catch the attention of the Justice League, and the two groups face off over Bialya. The conflict finds a temporary resolution (at least for this issue) when Batman accepts that the League is violating Bialyan airspace and leads his team away. 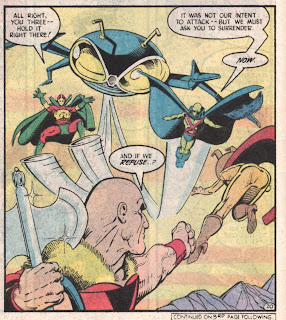 Throughout the issue, Batman stands firm as the team’s leader, even if his fellow members respect his guidance rather grudgingly. Significantly, though, J’onn takes his own place as a sympathetic, levelheaded and ultimately strong second in command. Regarding the story itself, it feels quite dated anymore, very much a product of 1987. Otherwise, the characterization and dialogue continue to entertain, although Guy Gardner’s insistence on referring to Captain Marvel as “Captain Whitebread” reads terribly--and even embarrassingly--stilted. 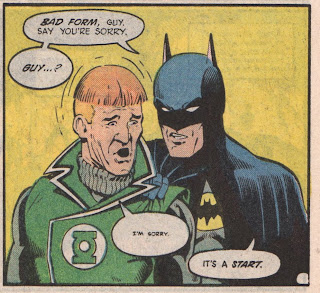 As for the art, the cover is a true weak link, a real step into mediocrity after the bold and now rightly iconic cover image from issue 1. Inside the book, however, Maguire and Gordon’s work again shines, with Maguire’s penchant for facial expressions perhaps best manifesting itself with a group of Bialyan soldiers, awestruck by the power of the Silver Sorceress, Wandjina and Bluejay.

Speaking of Bluejay, I was at first utterly confounded by his actual size, but upon a closer read or three, it seems he can shift his size, shrinking down to the approximate scale of his namesake, or growing to roughly the size of his compatriots. (Also, on the subject of artwork and as an addendum to last week’s post, it was unfair of me to credit Maguire for the run of the book when he was in fact off of the title for much of its run. However, in the 20-plus issues he did pencil, he undoubtedly developed the Justice League style, to which his successors would lend their own touch.) 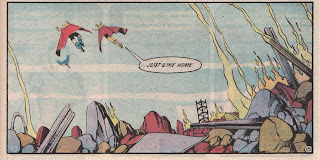 The issue ends with the space that will become the letters page, now simply titled “Justice League” to match the book. Only being issue number 2, however, the space eschews letters in favor of a piece penned by editor Andy Helfer, who details this reboot’s genesis. Here are what strike me as two especially noteworthy passages:

“The JUSTICE LEAGUE of AMERICA defines the greatest of DC’s heroes in a way which ‘solo’ superhero books can not--that is, it defines the individual heroes in the context of their peers--it deals with the FRATERNITY OF HEROES, and allows readers, for a few brief moments, to enter into that private world, and see how heroes interact with EACH OTHER, rather than the ‘ordinary’ people the heroes are sworn to protect, or the villains they are duty-bound to battle [....]

“Even in the old days, the emphasis on America was down played. The JLA saved the WORLD, the UNIVERSE, every month--the considerations of America were almost petty in comparison. Even though they consistently stated their national affiliation (and even though there always seemed to be at least one MARTIAN in the group) the JLA always represented the interests of more than a single country. They played for the BIG STAKES--and perhaps the insistence on maintaining the ‘America’ led to some confusion on the part of the readers. Perhaps. We don’t really know. Either way, though, we immediately dropped the ‘Of America.’” 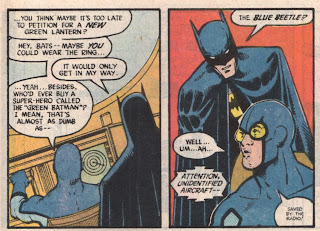 Boy, did I love The Centurions back in the day, especially the green dude who I swore was an animated Tom Selleck. It’s a real shame I missed out on this miniseries, advertised opposite page 17 in this issue… 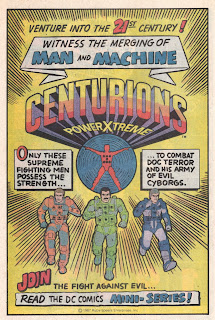