60 WEEKS WITH THE JUSTICE LEAGUE: Week 1 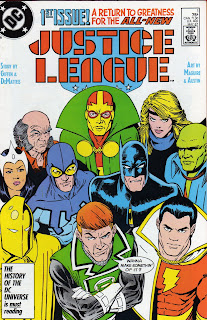 And so begins an epic journey, not only for the Justice League, but for The Danger Digest as well. For we’re about to go through the entirety of the Keith Giffen, J.M. DeMatteis and Kevin Maguire run on Justice League--60 issues that ran from 1987-92--book by book, one book per week, for a total of 60 weeks. (Along the way, we’ll also cover the 36 issues of Justice League Europe that began around the middle of that run and fell chiefly under Giffen’s guidance, with DeMatteis contributing to a goodly number of issues as well.)

Giffen, DeMatteis and Maguire’s Justice League represents a series that I think I really love. Clearly I’ve gone to the trouble and expense of acquiring all 60 issues (96 counting JLE), but I’ve only ever actually read maybe a handful of them. I enjoyed that handful enough that I tracked down nearly the complete run a couple of years ago, but I’ve only just filled in the final issues I’d been lacking, and I’m only now getting around to tackling this beast from the beginning. Here’s hoping that 60 weeks from now I can say it was worth the time and expense… 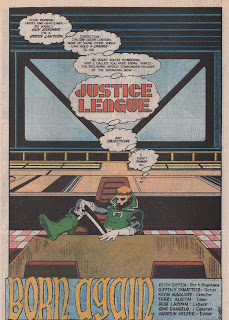 JL #1 picks up after the events of DC’s Legends crossover event--which itself followed Crisis on Infinite Earths--and the cancellation of the previous Justice League of America series with issue #261. DeMatteis, who had worked on the last issues of the League’s previous incarnation, stayed on to script, and he was joined by Giffen, who prior to this assignment was best known for his work as an artist.

In addition to scripting, Giffen contributed the breakdowns for Maguire, whose pencils perfectly complement the writers’ emphasis on action, comedy and the personal interactions between grownups who spend the better part of their days wearing costumes.

Which brings me to the team’s members in this first issue. Presented roughly in the order in which they appear, they are: 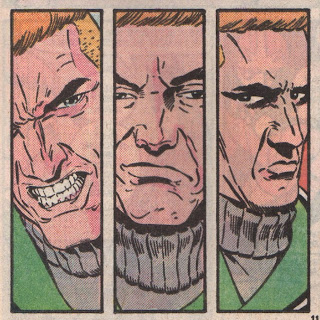 Guy Gardner: If all of these characters are childlike in their wardrobe choices and good-versus-evil worldview, Guy’s the only one completely incapable of at least acting like an adult. When I was younger, I hated him and didn’t have a clue how he could be a Green Lantern. Now, I love to hate him, which was of course the point all along.

Black Canary: She rolls into the headquarters with a deep respect for the League’s history. Also, she looks just like Sarah Connor at the end of The Terminator (1984). 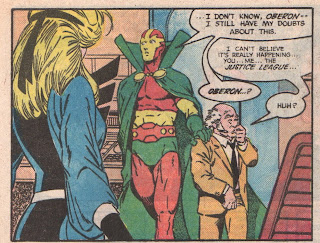 Mr. Miracle and Oberon: Gardner’s incessant jokes regarding Oberon’s short stature might grow old in a handful of issues, but here it’s all good fun. Also, there is always room, on any team, for characters created by Jack Kirby. 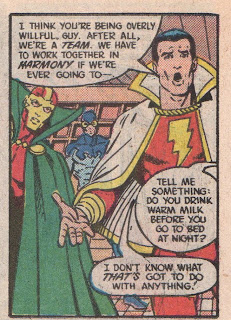 Captain Marvel: At least this guy’s alter ego really is a little boy. 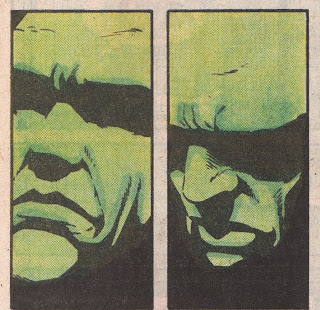 Martian Manhunter: The consummate veteran of the League’s many incarnations, J’onn J’onnz grimly carries the memory of recent tragedy. He’s also, arguably, the most powerful member of the team, but with this bunch, he just can’t no respect. 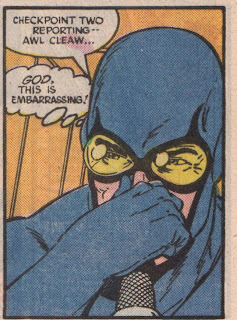 Blue Beetle: I tried reading a few issues from this run of Justice League when I was a kid, and I totally did not get it. However, I instantly thought Blue Beetle was terrific. That impression has not changed. 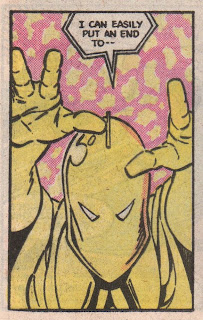 Dr. Fate: Growing up, I used to read his backup story in the monthly Flash series, so I’ve always had a soft spot for him. Also, apparently reassembling the League was his idea. 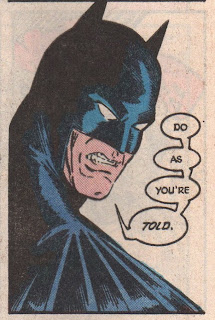 Batman: It’s up to Batman to actually reform the re-formed League, and babysitting the likes of Guy Gardner really gets his cape in a twist. But you know what? Angry babysitter Batman is funny. 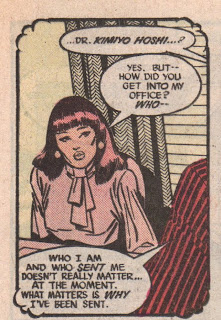 Dr Light: Unbeknownst to the rest of the team, she was asked to be a member and given a “signal device,” which beeps at the darnedest times. 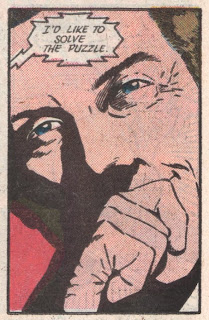 
Despite Batman’s desire to keep a low profile at first, the new League is forced to make its public debut when a ragtag band of terrorists holds the United Nations’ General Assembly hostage; the League is alerted by Dr. Light, who, in her secret identity as Dr. Kimiyo Hoshi, is among the captives. Batman sends Fate and Marvel ahead of the rest of the team, who follow in Beetle’s flying “Bug.”

Naturally, hiccups occur in this team’s first outing: Dr. Fate mysteriously “disappears,” perturbing Batman something fierce, and Guy continues to be a pest at every conceivable opportunity. All the same, the team easily dispatches the mercenary misfits--too easily, in fact, for Batman’s tastes. Comedic touches season the action, but the story ends on a rather dark note, with the leader of the terrorists actually killing himself. It’s an action it seems Batman could have easily prevented, and as such I’m not sure it totally jibes with Batman’s character. (Also, it’s pretty ridiculous that this motley assortment of terrorists could have infiltrated the General Assembly, but then again, it’s also ridiculous that the people who come to save the day arrive in a giant flying beetle, so I’m happy to roll with it.)

Of course, some growing pains are to be expected as this new creative team finds its footing, but on the whole, I closed the first issue in eager anticipation of the next. Questions linger, most notably surrounding the mysterious Maxwell Lord (who is confirmed on the final page to have some significant ties to the U.N. attackers). So come on back next week, maybe for some answers, probably for more questions, and most definitely for more danger. Yo-ho! 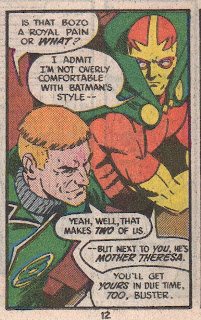