Sometimes, one panel can say it all. Other times, all the panels on a page come together to make a whole far greater than any of its parts. And on occasion, neither page nor panel hits the mark (but hopefully the artist at least hits the deadline). This is our discussion--this is Page and Panel.


To wrap up our two-year-anniversary celebration here at The D.D. blog, I humbly--and belatedly--present a “Page and Panel” column I’d originally intended to write back around October of 2007, when the Green Arrow Year One miniseries was still actually on the shelves.

Green Arrow as a character never really caught my attention until I picked up the hardcover collecting the Kevin Smith-scripted “Quiver” storyline back in college. After that, I slipped in and out of collecting the monthly series, but I did my best to keep tabs on the character, and a “Year One” event was ample reason to fork over $2.99 on a bi-weekly basis. Truth be told, I’ve long been a sucker for such retcons, and the artwork by Jock didn’t hurt any either.

Year One reteamed Jock with writer Andy Diggle; the two had previously collaborated on Lenny Zero and The Losers. The artist’s work demonstrates an almost reckless energy that feels at any moment like it could teeter off into abstraction, and yet it remains grounded in an utterly believable--albeit unique--realism. This quality is evident even in his covers, including that for the first issue of this Year One miniseries: As Oliver Queen stands in ankle-deep water, his shadow points right back to him, simultaneously evoking the numeral 1 and suggesting an arrow, with Queen himself as the arrowhead. Additionally, the shadow that shrouds Queen’s face underscores the identity crisis (no pun intended) he faces in this first chapter and indeed throughout the Year One arc--that of the spoiled playboy who realizes his selfish lifestyle has left his soul dried and hollow--while also hinting at the masked identity he will ultimately assume. 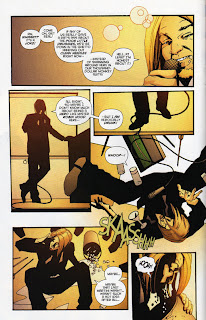 This struggle comes to a head at a charity auction for the Star City Drug Rehab Center, which Queen attends with Hackett, his private security man who, a few pages later, will turn traitor. When the bidding opens at $1,000 for a longbow from the estate of Howard Hill--the bow-hunter who executed all of the trick shots for Errol Flynn in The Adventures of Robin Hood--an inebriated Queen jumps to his feet and offers the winning bid of $100,000. Asked to say a few words to commemorate this show of “generosity,” Queen takes the microphone and manages to make a first-rate ass of himself on page 10.

Queen’s buffoonery is ironically complemented with a golden hue courtesy of David Baron’s colors (themselves truly a perfect complement to Jock’s own work); the golden cast also emphasizes the wealth gathered in the room. Further, echoing the cover, Queen’s lack of substantive identity is again made manifest with a stark use of silhouette in panel two. One of the subtler elements, however, proves perhaps most noteworthy: the “drunk bubbles” that float near Queen’s head in the first panel. 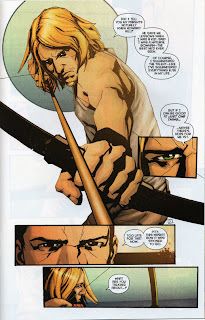 The circular motif--appropriately obscured and multiplied in Queen’s drunken stupor--comes into sharp focus on page 14, where Queen, for the first time this issue, picks up the bow and arrow. Yachting off to Fiji to supposedly strike a shady business deal with Hackett, Queen takes up the Hill bow for some target practice. Here, instead of a visible display of his clouded senses, the circle coalesces as a nimbus over the will-be hero’s head, a circular “panel” the character breaks through literally like an arrow.

This layout resurfaces on page 12 of issue two when, stranded on an island and wielding a makeshift bow and arrow, Queen prepares to go hunting. Wearing a hood to protect himself against sunstroke, we see the hero literally taking shape, and the absence of any other panels on the page supports his greater focus, his single-minded resolve, his coming into his own and recognizing the true character he so lacked at the story’s beginning. 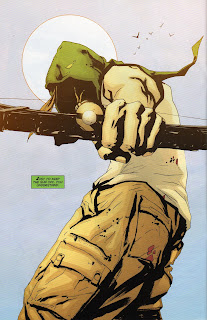 There we have it, dear readers. My thanks to you for bearing with me through this trip down memory lane. Please come on back next week, when I’ll be posting my second 24-hour comic, which was made just this past weekend. (I’m almost recovered at this point.)

All images in this post copyright DC Comics
Essay copyright Jon D. Witmer/The Danger Digest
Posted by Unknown at 7:04 AM