Around the time I posted my previous 24-hour comic, “Stories of Boys and Girls,” I developed a serious jones to make another. Unlike my previous effort, though, I was determined this time to drag some friends along with me through the misadventure--after all, misery really does love company. My vision was to get three other people, because I figured the four of us would fit nicely around the kitchen table in my girlfriend’s and my apartment. To my amazement, the three friends I had in mind all agreed without the slightest coercion, and even more incredibly, we were able to quickly settle on a date that worked for all of us. And so, on Saturday, August 1, 2009, we gathered around the table, surrounded by a heady supply of caffeine and booze, and at 10 a.m. we started the clock. What follows are my own 24 pages (plus a cover): 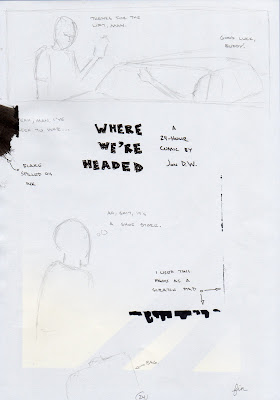 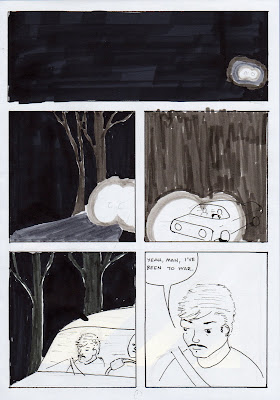 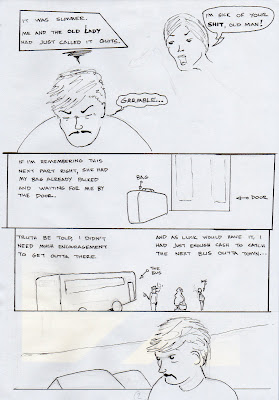 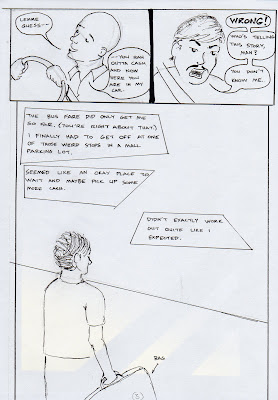 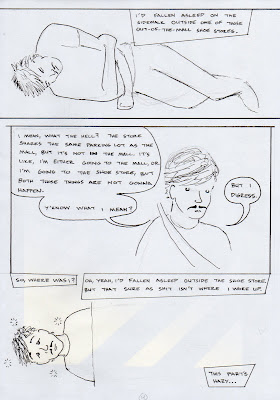 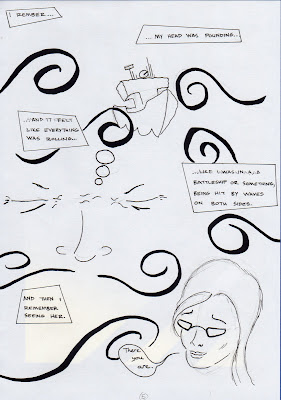 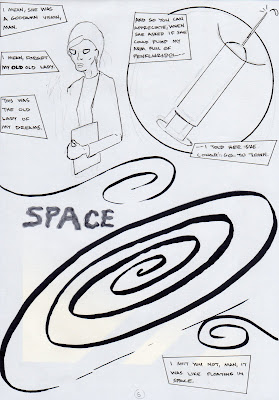 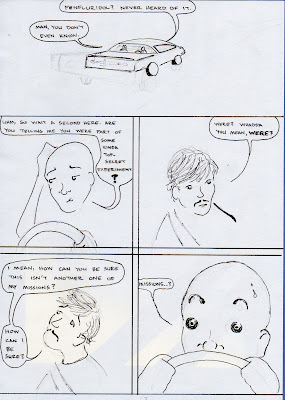 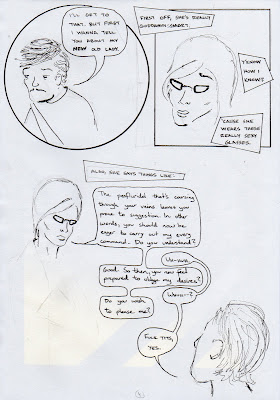 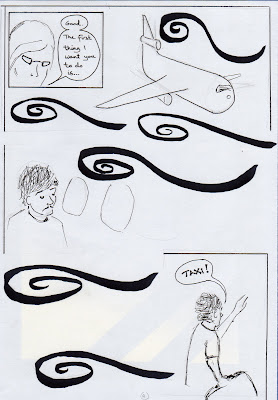 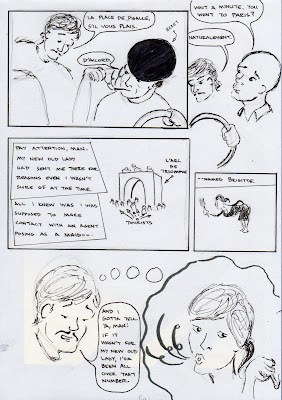 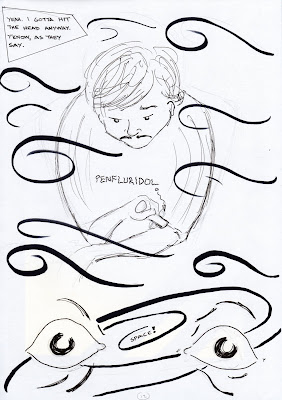 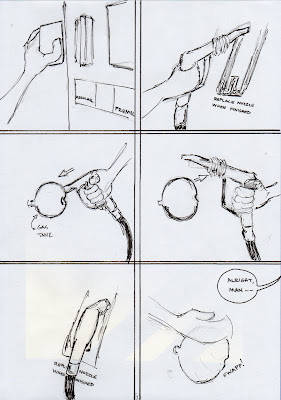 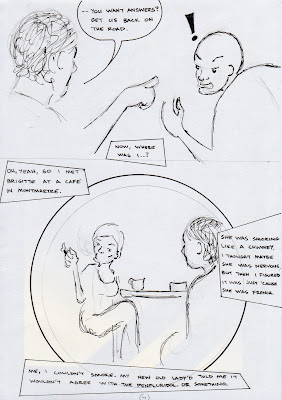 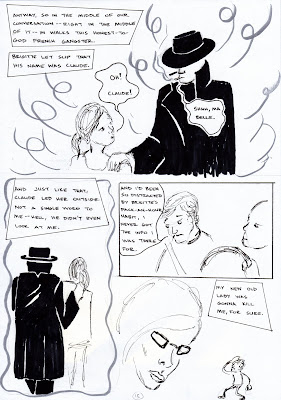 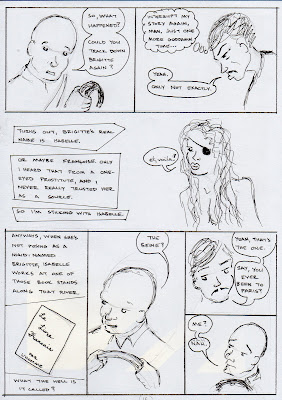 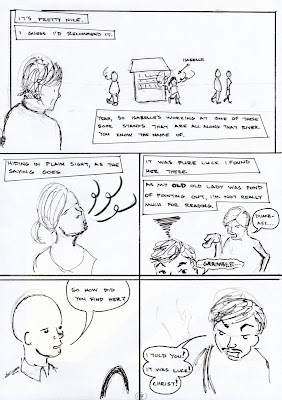 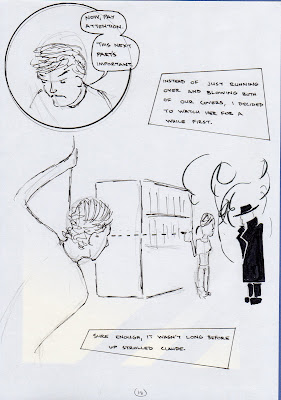 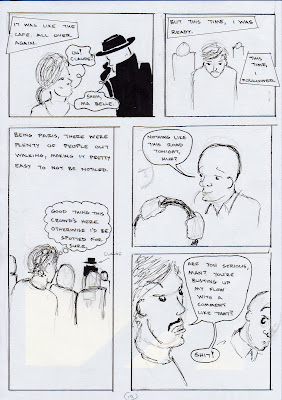 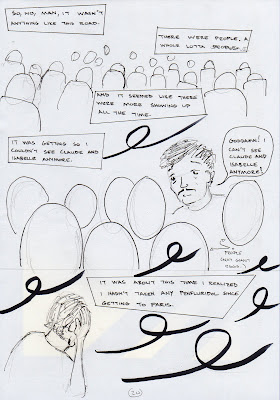 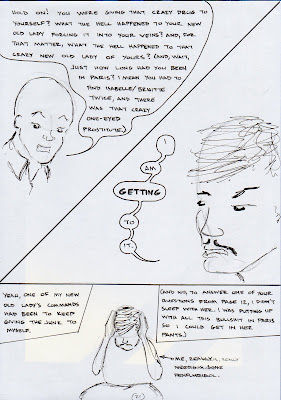 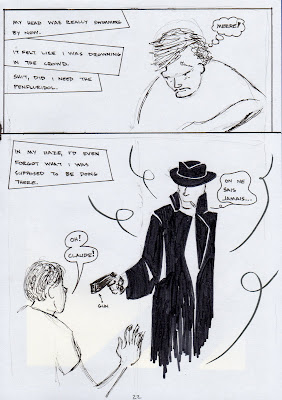 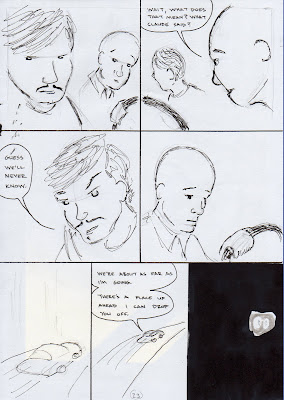 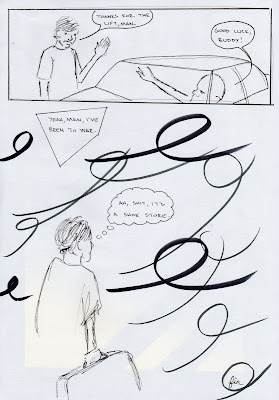 Of the four participants, I was the last to finish, wrapping things up at 8:30 a.m. on Sunday, August 2. (By the way, if anyone’s interested, after penciling with a Sanford Digit 0.5mm mechanical pencil, I inked with a set of Pigma Micron black pens; other embellishments were made with Faber-Castell PITT brush pens (gray tones) and Copic brush pens. All illustrations were done on Letraset Bleedproof Marker Pad.) The last time I tackled the 24-hour challenge, I made the mistake of totally finishing each page before moving on to the next; this time out of the gate, I determined to rough each page in pencil, then go back to letter each page, and lastly go back for the final inks. When I do my next 24-hour comic (yes, I did say when), I will almost certainly repeat this new method.

Considering my limited abilities, the obvious flaw of this book is the art itself. Though I rushed it at the time and wasn’t thrilled with the results, in retrospect I wish I had more pages that looked like Page #1--it’s great to see some black and gray and have some actual contrast. Of course, it also would have been nice to connect all the floating heads to some actual bodies, and to give distinct faces to the crowd of eggs within which the narrator nearly drowns on page 20.

On a closer read, I think it’s more troubling that the story’s women are all rather unsympathetic, from the nagging “old old lady” to the machinating “new old lady”; Isabelle and the one-eyed prostitute aren’t really seen enough to be more than objects, which isn’t any consolation. Likewise, I’m more than a bit embarrassed that all of the French characters are stereotypes. For what it’s worth, the story is seen/told through the narrator’s perspective, and he isn’t exactly supposed to be a good guy himself.

That said, I don’t mean to be a Debby Downer about the whole comic. Yes, when I first finished it, I was convinced it was a travesty, but that was really just my exhaustion talking. As I’ve put myself back onto a decent sleeping schedule and had the chance to re-read the book a handful times, I’ve become convinced it’s not half as bad as I’d feared, and in fact there are elements I genuinely like--even a few drawings.

One particular point of pride is that I managed to incorporate a Battleship and Space on consecutive pages--this was a challenge given by my girlfriend, and when she posited it, I was pretty sure it wouldn’t happen. (Since I’m mentioning where certain elements came from, I should note the Penfluridol was a gift of Wikipedia’s random-article generator; a few other ideas arrived by means of Scott McCloud’s Story Machine.) Also, despite his status as a stereotype, I like the character of Claude. What can I say? I’m a sucker for French gangsters.

Overall, I’m pretty happy with how the book reads; I think the dialogue and narration is completely passable for the story. (The angled narration boxes, by the way, were a response to the time crunch, but happily they also underline the narrator’s skewed perspective.) And speaking of the story, after I finished the pencils and went back to ink the letters, I was pleasantly surprised to discover that the driver pulls double duty, standing in for both me as the improvising creator with “like a couple thousand questions about [the] story so far,” as well as for the reader, who similarly doesn’t have a clue “where we’re headed.”

Finally, a note on the cover: Somewhere around 10 p.m., a certain party spilled his ink onto the table, and it did a number on my rough pencils for the last page. I consequently re-did the pencils for page 24, but at the end of the day, it struck me the original would make a fitting cover, as it speaks to the 24-hour-comic process itself while also literally showing where the story is headed. A happy accident, that. 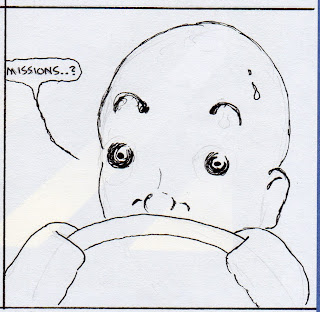 This post’s images and text copyright Jon D. Witmer/The Danger Digest
Posted by Unknown at 7:03 AM