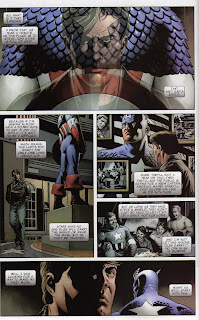 Bucky Barnes has had a rough go. Sure, he got to fight alongside Captain America during the War to End All Wars and even go head-to-head with der Führer himself, but then he was ignobly exploded before WWII had come to an official close. Or at least, that’s what everybody thought had happened, until writer Ed Brubaker decided to bring back ol’ Buck, much to the knee-jerk chagrin of countless readers who had all relegated Bucky to third-string sidekick status, his fate at the fuse of a remote Nazi missile-plane his fitting end.

Then a miracle happened. Brubaker not only resurrected Bucky, he somehow managed to make him one of the most dynamic characters currently at play within the Marvel Universe. Which is all the more significant since Cap’s been assassinated and Bucky—now known by the moniker ‘Winter Soldier,’ the name he operated under as a covert, brainwashed assassin in between extended periods of cryogenic storage over the past six decades—carries much of the weight of the book still bearing the title Captain America.

After Cap’s death in issue 25, issue 26 ends with Bucky vowing to avenge his former partner by killing Tony Stark, AKA Iron Man. When next we see Buck in the beginning of issue 27, he’s visiting the Captain America exhibit in Washington’s National History Museum, and it’s here that we find this column’s focus—page four, which in five panels perfectly encapsulate the essence of Bucky’s current arc.

At first glance, page four as a whole presents a surface symmetry that echoes the Winter Soldier’s cold, analytical mindset, his calculated decision to go after Stark. However, panels three and four slightly upset that balance in terms of both space (weighed against panel three) and color (with panel four’s flashback presented in grayscale). In turn, this slightly off-kilter layout suggests that Bucky’s breakfast may not be so well balanced after all.

While Captain America is no longer a physical presence in the book, his memory nevertheless continues to bind the story together, and Bucky’s particular storyline hinges on his relationship with Steve Rogers (Cap’s alter ego, for any latecomers). Thus, it’s significant that every panel on this page features both Bucky and Cap (or the displayed mock-ups of him, anyway), and as Bucky mulls over the facts as he sees them, the ‘camera’ tracks around him and the exhibit, literally covering all the angles.

Lastly, taking a close look at panel one, we see Bucky’s reflection superimposed over the display case that supposedly holds Cap’s real uniform and shield, but which Bucky deduces to be fakes both. Everything is centered, and the star on Cap’s chest lines up over Bucky’s forehead just where the ‘A’ on Captain America’s mask would have been, painting Buck as the protector of Steve Rogers’s legacy. In contrast to this image, panel five gives us Buck’s face in close-up on the left of the panel, with the back of the Captain America statue to the right. After steeling himself to single-mindedly hunt down Tony Stark, is the Winter Soldier in fact turning his back on Captain America and the ideals he stood for? Or is the statue he turns away from merely a symbol of Stark’s campaign of disinformation? Either way, the half-light on Bucky’s face reminds us of the complexity within this once-forgettable artifact from a bygone era in comics. In the wake of Captain America’s assassination, the battle of good vs. evil rages on not just between heroes and villains, but within each individual.