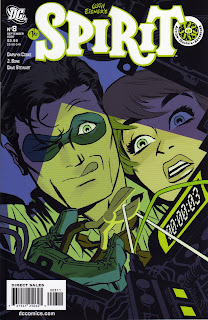 Really, it makes perfect sense that Darwyn Cooke has been breathing new life into Will Eisner’s quintessential comic book hero, the Spirit. After all, Cooke is a classicist at heart, and his own panel at this year’s San Diego Comic Con dripped with equal doses of nostalgia for the comics of his youth and lament that those books have gone the way of the dodo in favor of the darker, more “mature” fare of today’s industry.

“Maybe all this grim and gritty stuff is doing more harm than good,” mused the writer/artist before his room full of fans and admirers. “I read and loved Watchmen and a lot of the books that came out of that, but I don’t think anyone expected to see the whole industry turn into that.”

With The Spirit, Cooke has managed to maintain an air of levity true to the tone of Eisner’s original series, all the while addressing themes ranging from terrorism to love triangles to bestiality (implicit though the latter may be) and updating the story to the present day. Likewise, Cooke’s ability to craft in 22 pages an engaging and complete story evokes a bygone day when such technique was the norm. (Hell, Eisner did it week in and week out in only seven pages.)

Aiding and abetting Cooke’s revivification of the past power of the comics page are inker J. Bone and colorist Dave Stewart, modern greats, both of them. About Bone, Cooke noted at Con, “We’re old-school brush cartoonists,” making him a pitch-perfect accompanist for Cooke’s rhythm of blues.

Speaking of color, Cooke may well have been selling Stewart short when he described him at Comic Con merely as “one of the best colorists in the business.” Arguably, anyone else’s colors for Cooke’s The New Frontier would have grossly underwhelmed in comparison to Stewart’s hues, and his work for titles like Hellboy and BPRD has upped the anty for the craft as a whole. Here in The Spirit, from one panel to the next, Stewart invokes an exaggerated geometry of color that consistently (and subtly, almost despite itself) advances the character beats laid out by Cooke. The cumulative effect is something like the cinematography of classic Hollywood cinema translated to the printed page.

Digging into some particulars, issue #8 kicks off in media res, with the Spirit already a captive of criminal mastermind the Octopus, and Special Agent Silk Satin closing in to save the day. Of course, delivering this information within the first three pages leaves 19 more for things to get decidedly messy for our heroes, and so Satin’s entrance spoils the Spirit’s mano e mano bout of fisticuffs with the Octopus, distracting the Spirit and allowing the Octopus to escape, but not before he shocks Satin with enough volts to power Central City and give her a wicked amnesiac hangover when she finally comes to.

Discovering Satin’s amnesia, the Spirit does his best to remind her who she is and how they landed in their current pickle, but when nothing rings a bell, he’s forced to take drastic action. In the fourth panel on page 17, the Spirit takes Satin in his arms and lays one on her in a “widescreen” panel that presents the kiss in a manner worthy of a Technicolor romance. 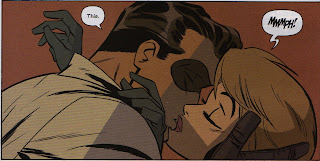 In addition to Cooke’s caring pencils and Bone’s stunning brushwork, this panel is particularly potent for Stewart’s colors and Jared Fletcher’s letters. With one small word balloon, the Spirit answers Satin’s question from the previous panel, “What are you doing?” and delivers the only word in the entire book that’s not all in caps. “This,” he tells her, his face dipping into shadow while Satin’s eyes are illuminated by a source behind the Spirit’s back and beyond the panel’s borders. And it’s only her eyes, the rest of her face is shaded by the Spirit’s larger frame. Garbo wished she could be lit this well. 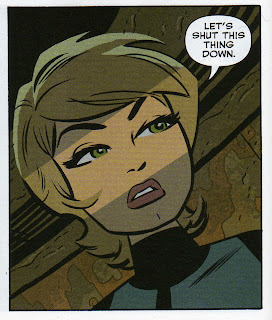 Cooke and co.—or perhaps more rightfully Stewart deserves the credit—take this technique even farther when Satin fully overcomes her amnesia, casting a bold slash of light across her eyes (page 20, panel nine). As Satin steels herself to tackle the timebomb left behind by the Octopus, the eyelight reminds one of the expressionistic camerawork of such directors of photography as William Daniels (Queen Christina) and Rudolph Maté (Gilda).

On page 22, in panel eight, Ellen Dolan, the Spirit’s on-again, off-again sweetheart, gets similar treatment, although where Satin’s clear vision came from her determination to foil the Octopus’s plot, Ellen’s eyes are focused by her anger and frustration with the Spirit’s untamable womanizing. And for his part, the Spirit never seems to see things as clearly as either of these two leading ladies, the shadow that frequently falls across his face (see page 22, panel one) equally indicative of insouciance and naïveté. (Again in Cooke’s words, “Denny [Colt, AKA the Spirit]’s a far dumber and better person than I am.”) 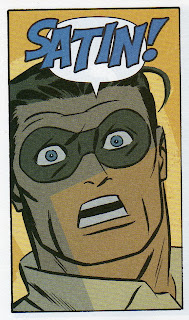 If there’s one technique from the vintage Spirit that Cooke seems content leaving alone, it’s Eisner’s then-groundbreaking tendency to break the panel, although Eisner himself toned this down within the first year of his weekly Spirit strip. A useful narrative tool when employed judiciously, it’s a technique often abused, and Cooke’s art and story seem that much more pure for steering clear. 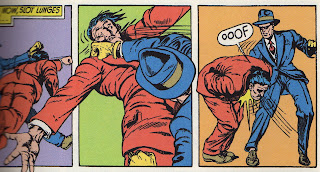 (From "The Black Queen" by Will Eisner, page five, panels three through five. First published June 16, 1940)

This entire creative team will be sorely missed when they toss in the towel with issue 12, due to hit stands in November. At least fans will have been given a worthy addition to Eisner’s legacy, even if only for one year. “I can’t do this if there’s a chance of it being a less than perfect book,” Cooke explained in San Diego. “It’s Will Eisner’s Spirit.” True words, but Cooke, Bone, Stewart, and Fletcher have made it their own, as well.