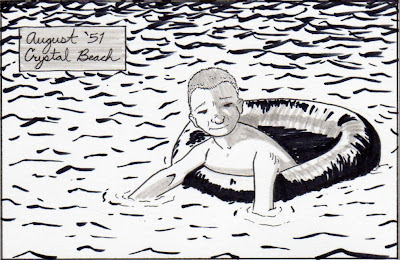 It's been more than a year since I last paused to take stock of this blog--and 3 years to the day since I fired my first volley--and I do believe this is as a good a time as any to check my heading and see how far off-course the ship might have sailed. After two years of spotty blogging, I've finally managed to stay focused on comics and maintain a consistent run of posts--at least one a week since May of '09. I've even kept up with "Bag It and Board It," reading and reviewing more than 50 trade collections and graphic novels. (Granted, I abandoned the column's original formula, eschewing the proposed weekly post about floppies.) There are always plans to continue posting the occasional "Page and Panel" and "Memory from the Longbox" as well, but my "60 Weeks with the Justice League" project has effectively sapped whatever time I would have had for those columns. Ah well, with a bit of luck, there's still the future.

But that's not to say all's gone according to plan. Last year, after chiding myself for not getting my long-talked-about webcomic online two years prior, I went on to promise both the comic and--ha-ha!--a Facebook page in the near future. Probably no one's noticed the absence of either, but trust me, they aren't there, and after two previous "Pelagic" postings, I've learned better than to ascribe a timetable this time around. I will say this, however: Don't hold your breath on the Facebook page. It may well come at some point down the line, but only if I see it as a viable means of garnering attention for the aforementioned webcomic, which I'll only tease here by saying it's well into visual development and it's been rechristened. As I've said before, like all things worthwhile, this is meant to be an adventure, and those rarely go according to plan.

Finally, while I have been drawing, I know it hasn't been enough, and none of it's been aimed for the ol' D.D. (The last image I posted was way back in October. That's even more negligent than I thought.) However, I'm currently cooking something up that, if I can get it together, will get a lot--a lot--of my own drawings up here throughout 2011. For better or worse.

Now then. Back to work. Yo-ho!