Jon D. W. throws down a good bit of his hard-earned cash on comics. (And sometimes, as in the case of The Losers, he borrows the comics from friends.) Here, he spills the beans on whether or not it was worth it. But to paraphrase LeVar Burton, don't just take his word for it--you should read comics, too.

Collecting the entirety of the easily overlooked and--let's face it--rather ill-conceived Batman daily newspaper strip that was canceled three years almost to the week after its inception, this dense tome makes for some phenomenal bathroom reading. Granted, that's probably not the sort of pullquote the publisher would want to slap on the cover, but this also isn't the sort of narrative I want to lose myself in for hours at a time. It is a fascinating piece of history, though, made all the more interesting for Joe Desris' essays, which place the work in the context of Batman and DC Comics' own history as well as the history of newspaper strips circa World War II. And if Desris seems to harp on this strip's failure to capitalize on the popularity of Batman and Robin, he's hitting the nail right on the head: The two heroes often go weeks at a time without appearing in costume, which doubtless left many an editor wondering just what strip it was they purchased. (All the same, my favorite story in the collection is "The Karen Drew Mystery," a great noir piece--until the lousy ending--in which Bruce Wayne never has a chance to turn into Batman; this story featured Jack Burnley on penciling duties, and his work is, to my eyes, miles ahead of Bob Kane's.) Also, don't be fooled by this collection's cover; the Joker is the only one of Batman's popular rogues to appear in the dailies, with easily forgotten, formula villains padding the rest of the adventures. Nevertheless, it's well worth a look for those interested in comics' history, which we all should be. 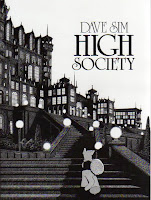 In the second Cerebus collection (or "phone book," as they're oft referred to), the titular aardvark sets aside his warrior's ways in favor of scaling the political ladder, ultimately besting--though only narrowly--Lord Julius' goat in the race for prime minister. Along the way, the supporting cast continues to grow even as characters from the last volume reappear, including Elrod, Jaka, the Cockroach (now going by "the merely magnificent Moon Roach") and the aforementioned Julius. (Furthering the Marx Brothers allusions, Sim here complements Julius' Groucho with the introduction of an ersatz Chico, dubbed Duke Leonardi.) Alongside Cerebus' meteoric rise through the political spectrum, Sim's art develops at an equally brisk pace, and the artist continues to revel in experimentation with his layouts, even presenting the final seven issues in this collection in the horizontal, or landscape, orientation. Sim's sense of framing and use of negative space is also fantastic, as are the lighting effects he manages to create in pre-digital black and white. His bold use of black, often as a plain background, adds an illusion of richness that would have been absent with unchecked white backgrounds, while also contributing to the sense of whispered politicking behind closed doors. At times he also presents the readers with chunks of text in ways that would seem to have been an influence on the later work of Brian Michael Bendis. Throughout all of this, the disparity in size between Cerebus and nearly every other character provides an excellent foundation for further humor. Book 3, here I come.

Bechdel's coming-of-age/coming-out story, mixed with family history and a close focus on her father's secret life, is a phenomenal achievement that earns every bit of praise it's received and truly does raise the bar for autobiographical comics. It's also an incredibly dense read, full of literary allusions further layered with Bechdel's learned, rarefied vocabulary and penchant for sesquipedalianism. However, her line art--complemented with a watercolor wash--keeps everything grounded, capturing all of the characters in a distinct and deceptively simple manner full of expression and vitality. The title comes from the author and her siblings' childhood nickname for the family-run funeral parlor, and while the subject matter often veers toward the macabre, the end result is a work that feels wonderfully, achingly alive.

Former 2000 A.D. editor Andy Diggle and gruff-art god Jock send the thrillpower meter into overload with a parade of guns, money, plane crashes and even live volcanoes. The eponymous Losers are a band of disgraced special forces personnel framed and left for dead, and now they won't stop until they get their lives back. This comic is The A-Team on steroids. (Or at least it was, until this summer's A-Team movie turned the TV series' crazy dial to 11 all on its own.) While I don't want to harp on movies in a comics review, I should also note that, for all of The Losers' screen adaptation's entertainment value, this book is a hell of a lot better than the film it inspired: the arch-fiend/puppet master Max is never seen; there's no crazy sci-fi bomb that doesn't make any sense; and Lee Loughridge's colors are, as always, first rate, just the opposite of the film's digitally processed-to-death patina. (It was remarkable, however, how perfectly cast the movie was.) I'm always happy to see Jock's art, and here I think he may be at his best, knocking out consistently solid layouts, to boot. Martinbrough's issue's, on the other hand, have just too clean a line for this cast of characters; while I'd like to see his work on a different story, here his art strikes me as being a bit out of place.

Following their critically praised collaboration on Elk's Run (which is in my stack to read; expect to see a review here one of these months), Fialkov and Tuazon teamed with Archaia to present this pitch-perfect noir--which beautifully doubles as an ode to Los Angeles. Breaking new digital ground, the book was originally released one chapter at a time (eight in total) on the Amazon Kindle, where I first read it. Writer and artist alike designed the book with that limited aesthetic platform in mind, and the package translated about as well as one could possibly hope to the digital reader. However, this 240-page, ashcan-size hardcover--packed with bonus content including a prose short story, the original pitch, concept sketches and more--is without question the best way to experience the latter days of Frank Armstrong, a washed-up private investigator on a hopeless case who's suffering from a terminal brain tumor that keeps knocking him "unstuck in time." Tuazon's work is deceptively simple yet totally unique: There's a lifetime's worth of energy in these black-and-white pages. (A gray wash helps distinguish Frank's memories from the present day; again, it's a simple technique wonderfully executed and completely effective.) I love every damn page.


All images this post copyright their respective publishers. Text copyright Jon D. Witmer/The Danger Digest.
Posted by Unknown at 6:00 AM

Email ThisBlogThis!Share to TwitterShare to FacebookShare to Pinterest
Labels: Bag It and Board It, Batman, Cerebus, Fun Home, The Losers, Tumor