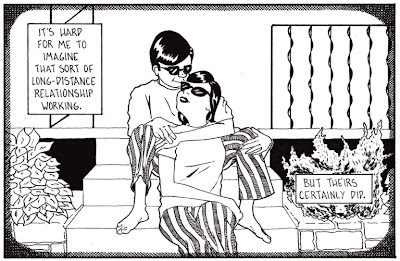 
The big Five-Oh! The only thing that would've been more impressive is if I'd actually posted it on time, but so it goes. Crazy days, these! Anyhow, apologies for the late post, and many, many thanks to everyone who's read these first 50 installments. (Only 200ish left to go!)

We're speeding ahead toward the end of Act One--roughly 10 more panels oughta get us there--but first, I'm going to use finishing 50 panels as an excuse to take a week's respite. Also, I've gotta fly to Vegas on business tomorrow, and I'm gonna be gone through most of the week. With some luck, though, I'll be able to rebuild a buffer at the end of the week and hit the ground running again on Monday April 18 with #51. And until then, fear not! I've got a big ol' behind-the-scenes post scheduled for this Monday, the 11th, that should give any diehards out there something to mull over during the intermission.

Again, thanks for reading, and if you like what you're seeing, I'd be thrilled if you passed the link around and introduced more folks to Pipe Dope. More soon! Yo-ho!
Posted by Unknown at 6:00 AM