60 WEEKS WITH THE JUSTICE LEAGUE: Week 54


Here's hoping Kevin Smith paid for the rights to JLE's title--nevermind William Butler Yeats. Seriously, though, folks (yeah, I know, I just started this post with a bad joke followed by "seriously, though, folks"--what can I say, I've been reading too much JLI), "Breakdowns" continues at a breakneck pace in these two issues. In JLA, Ambassador Heimlich continues to mess with a good thing, firing Beetle and Ice and replacing them with Tasmanian Devil (who, according to the sacrosanct letters column, was a member of JLAustralia, anyway) and Doctor Light. (That's right, the same Doctor Light who wanted nothing to do with the League back in the beginning, but has no trouble showing up now, and in costume, no less.) On a bright note, it takes little more than a page for Tasmanian Devil to knock Guy Gardner on his ass, and that's always good for a laugh. Oh yeah, and apparently Manga Khan is in the process of bartering away Despero. 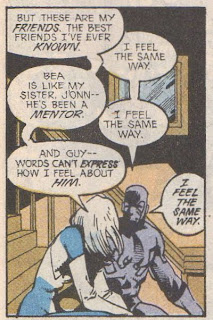 Meanwhile, it's revealed that Jack O' Lantern has allied himself with Sumaan Harjavti, the brother of the late Rumaan Harjavti, and the two arranged the assassination attempt on Max Lord to look like it was the Queen Bee's doing; Jack wants sole control of the Global Guardians, and Sumaan wants to rule Bialya. Speaking of Bialya, the members of the Ex-Justice League--namely Captain Atom, Elongated Man, Blue Beetle and Ice, aided and abetted by Crimson Fox and Inspector Camus--sneak back into that country in the hopes of getting to the bottom of the apparent Queen Bee connection, which leads us into JLE. Naturally, the heroes' snooping doesn't go according to plan, and when Jack O' Lantern catches them in the Guardians' Dome, all hell breaks loose. It's all pretty standard fare until Atom dodges one of Jack's power blasts, which winds up decapitating Little Mermaid. (Somehow, Jack keeps all of the other Guardians in a suspended state until he wakes them; they're all seated around their meeting table throughout this fight. And yeah, that's a little awkward. Also, and perhaps more importantly, until reading this issue, I had no idea there was a DC Comics character named Little Mermaid. What a world, you know?) Naturally, the erstwhile Leaguers are now charged with murder, inciting yet another Major International Incident. Oh yeah (again!), and it turns out Heimlich is one of the Queen Bee's drones. 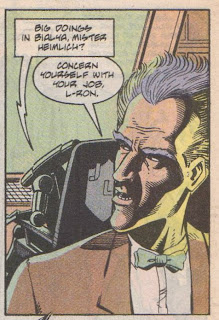 The best part of these two issues is undoubtedly the banter between Ted Kord and Ralph Dibny--it's like the best of Beetle's repartee with Booster, and it makes me wish these two would have crossed paths more often during this run. I don't mean that to sound dismissive of the story, though; this is a big piece of work that feels as epic as DC no doubt wanted the readership to believe it was. After four parts, it seems to be shaping up as a fitting send off to this incarnation of the League, but it does suffer in the art department. (Tangentially, Lappan and Schubert swapped books this time around, and I'm still not a fan of the latter's work in this series.) However, I do totally love the awkward stiffness in this panel from JLE, showing Crimson Fox and Ice in the heat of battle while done up in their civvies: 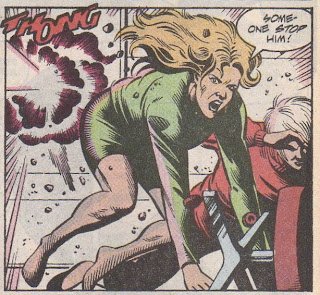 "Europinion" reveals JLE's cover credits: "Chris Sprouse and Bruce Patterson, pencillerer and inkerer, Bob LeRose, colorer." I'm not sure about that, though, seeing as that although no cover credits are listed in JLA, the cover itself bears Sprouse's signature (as well as "PCR"--anybody?), and that cover's style looks nothing like JLE's. A mystery for the ages, I suppose. Also, in a sign of the shifting winds, Dooley does, in all seriousness, ask the readership in "Justice Log," "Should we put Hal in the League?" 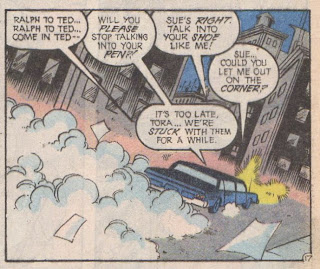 Lastly, and apropos of nothing, if ever I should have access to a time machine, I'm totally going back to '91 and taking advantage of both of these offers: 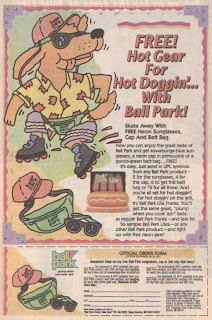 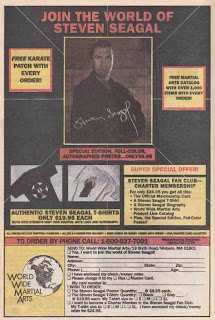