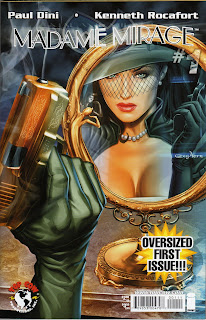 Written and created by Paul Dini (currently a DC staple, consistently delivering knockout Batman stories in the pages of Detective Comics and guiding the publisher’s weekly Countdown title), Madame Mirage takes place in a quasi-contemporary Los Angeles that’s adorned with equal parts future tech and ‘40s noir. The world’s superheroes had once benefited from “bio-engineering and cybernetic enhancements,” but when that same technology fell into the wrong hands (as it inevitably does, regardless of the comic book universe under discussion), the consequent rise in super-powered villainy led the government to force all the heroes to turn in their gear while the criminals painted their enterprises with a veneer of legitimacy. In this environment, the eponymous Madame Mirage wisps about, a vamp magician with a dead aim, determined to rid the city of its criminal underbelly by any means necessary.

Fleshing out this story in expressionistic detail is artist Kenneth Rocafort, whose work previously graced the pages of the Mark Waid-scripted Hunter-Killer. Penciling, inking, and with a hand in the colors to boot, Rocafort’s pages each display a unity that is all too rare in comics, giving the reader the distinct impression that the artist treats his panels as elements in the overarching image of the page rather than as individual vignettes with little or no bearing on one another. 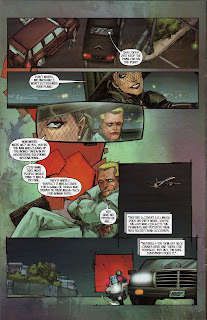 By page 18, Mirage has managed to impersonate criminal businessman Roger Maitland’s driver and she’s speeding Maitland toward his personal jet—and, naturally, his personal doom—at LAX (which just goes to show, if you don’t get bit by traffic on the 405, then the airport itself will not hesitate to take you down, in the parlance of Michael Mann’s Heat). Across the page’s six panels, each image is tied together chromatically, with the red brake lights in panel one bridged to the red flashers of the police motorcycle in panel six by means of a confluence of red forms that pool around Maitland, forming in turn an expressionistic landscape with echoes in page 19’s angled panel borders. Furthermore, page 19’s angles establish a tick-tock rhythm that heightens the suspense and emphasizes the fact that Maitland’s time is running short. 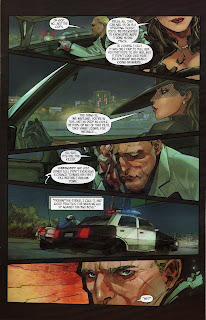 While on the topic of borders, the panels on page 18 begin crisp and neat but begin to devolve with panel three, formed by the contours of the rear-view mirror Mirage uses to study Maitland. Panel four is bordered only by panels five and six, which now demonstrate a hurried, even desperate, sketched quality, with panel five showcasing an airborne plane notably headed away from Maitland, an image of his carefully-laid plans flying out of his reach. Finally, panel six is noteworthy for its myriad borders, including one outline for the background, one for the road pounded by the rubber of Maitland’s limo and the pursuant cop, and one last red square behind the cop, with these varying levels of panels within the panel paralleling the intricacies of Maitland’s crumbling plan and Mirage’s command of the villain’s layered predicament. 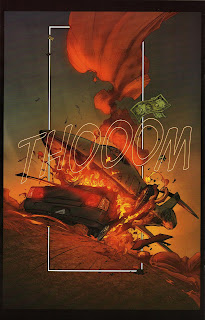 Maitland’s situation comes to a head on page 22, a bold splash page layered in the warm hues of golden hour (and accented one more time by red brake lights—a signifier of bad tidings for this king of the bad people) and caught as though with a wide-angle lens held at a Dutch tilt that emphasizes the volatile nature of Maitland’s demise. Rocafort also revisits his motif of layering panels, outlining the explosion on the page with white panel borders that focus the reader’s attention while failing to contain all of the action of the splash page, just as Maitland’s planned getaway left no room for Mirage’s intervention.

If Top Cow ever gets issue #2 on the stands, it will be a pleasure to see where Dini and Rocafort take Madame Mirage from here.