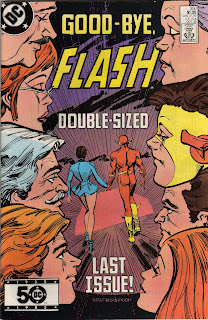 Jon D. Witmer—writer, holder of odd jobs, keeper of comic books. Carbon dating the origin of his love for sequential art back some two decades, Jon now mines the varied gems of his collection. These are his memories from the longbox…

When I think of the Flash, the first images that spring to mind are Carmine Infantino’s pencils, and understandably so when one considers that Infantino was responsible for the look of the “new” Flash that appeared in Showcase #4 back in 1956, ushering in comics’ Silver Age. However, the artist’s images that are most vividly etched in my mind were put to paper nearly three decades later for The Flash #350, the final issue of the book with Barry Allen under the Scarlet Speedster’s cowl.

Originally landing on stands during the latter part of 1985 (and right in the thick of DC’s Crisis on Infinite Earths), #350 wrapped up the loose ends of the Speedster’s solo title and offered the hero some peace that would be stripped away utterly over in the publisher’s multiverse-shattering maxiseries. At the time I acquired the book, though, I was blissfully unaware of all of these goings-on, and the dubious means by which I came to own this particular comic are indeed just as much at issue here as the happenings within the printed pages.

My first introduction to the Flash was through a friend who had the character’s Super Powers action figure. That said, I had begun to dabble in comics and some of their tertiary accoutrements during the salad days before I could read, even picking up a Captain America action figure and spark gun along the way, but it wasn’t until the second grade that the gates opened wide and, lying awash in pages, panels, and secret identities, I embraced my baptism into the world of comicdom.

Finding my seven-year old self kicking it one afternoon with my friend with the Flash action figure, his mother—let’s call her Mrs. B—took us kids shopping, ultimately leading us through the hallowed halls of Toys R Us and offering to buy something we could share. Now, it should be mentioned that my buddy had recently informed me that the Flash was his favorite superhero, a distinction that carried with it some heavy emotional baggage even if it was reallocated on a near-daily basis in those mercurial days. Accordingly, when we decided that the day’s purchase would be a three-pack of comics (regularly sold in toy stores back in the late 80s and early 90s) that included the Speedster’s farewell issue, and Mrs. B offered me, as the family’s guest, first dibs on one of the books, the angels and demons within my callow soul did both clamor.

Perhaps I sacrificed a part of myself that day to some shafters’ hell, but as I reread the book 22 years after it was first published and nearly two decades after I carried it out of Toys R Us, I’m still every bit as intoxicated by the story’s visual impact (and I can sleep easy knowing that my friend’s chagrin is long since forgotten). Granted, the story’s a bit wobbly for me—in no small part due to having not read the issues leading up to this double-sized final chapter—but Infantino and inker Frank McLaughlin’s renderings of the Flash plus all his Rogues, Abra Kadabra, and even the Reverse-Flash (or at least Kadabra in the evil speedster’s guise) remain stunning to this day.

The story in #350 jumps off the starting line with the Flash on the lam, having been found guilty of the murder of the Reverse-Flash by a jury brainwashed by Abra Kadabra. In his race to clear himself, the Speedster is aided and abetted by the rotund Nathan Newbury, a juror whose body has since been inhabited by the psychic essence of Barry Allen’s presumed-dead wife, Iris West Allen, a tidbit that doesn’t become clear until the Flash and Newbury have traveled first to the 25th century and then to the 64th, all the while trying to track down the Reverse-Flash, who has been fairly active since going to the grave.

Down this improbable road through time, the Rogues follow the same trail of crumbs pursued by the Flash and Newbury, and when everyone falls into the clutches of Abra Kadabra in the far future, hero and villain alike band together to take down the magical mastermind. In the end, Kadabra proves himself little more than a parlor magician with more toys than he should be trusted with and whose ultimate aim is to change the recorded past as the capstone to his oeuvre. A noble goal for a humble man such as he. 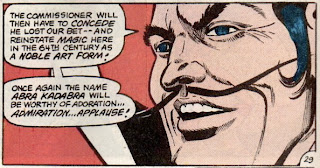 At book’s end, the Rogues return to 1985, where the Flash is cleared of all charges and the ever-changing tide of public opinion rises once again in the Speedster’s support. Meanwhile, the Flash goes to the 30th century, where Iris’s psychic essence has been transplanted once more, leaving Nathan Newbury with his own body back in his own time, and giving Iris a body that should be more enjoyably navigable for Barry (himself no stranger to updating one’s look, evidenced in the panel that diagrams the change affected by his own reconstructive surgery after his battle royale with Big Sir).

And here the book ends. “They lived happily ever after…for awhile….” Barry would stay with Iris in the 30th century until heading back to sacrifice himself during the Crisis and effectively save the DC Universe. In the letters page at the book’s end, writer/editor Cary Bates muses, “Needless to say, as one who has edited this book for the last two years…and written it continuously for the past fourteen…there is no one who laments the Scarlet Speedsters’s passing from the annals of his own magazine more than yours truly.” It was a hell of a run for both Bates and Infantino, and for passing the baton of comics collecting onto me, I’ll forever be grateful to The Flash.