Jon D. Witmer--writer, editor, keeper of comic books. Carbon dating the origin of his love for sequential art back some two decades, Jon now mines the varied gems of his collection. These are his memories from the longbox… 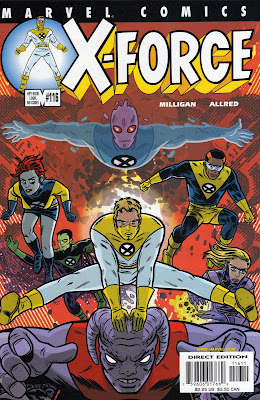 
I can’t quite remember how it happened, but what’s important to know is that during the summer of 2001, I rediscovered my passion for comics and invested myself once again in collecting them heavily. And when I returned to Ohio State in the fall, it was within my first days on campus that I visited Discount Paperback Center, located at the corner of High Street and Chittenden Avenue. Sadly--and please do correct me if I’m mistaken--I’ve heard that the shop recently closed its doors for good, but I’ll always remember it for the hole in the wall that it was, and I mean that as a great compliment. Let me set the scene:

Marked at street level with a vaguely Spider-Man-in-his-black-outfit-looking portrait painted onto the wall of the building, a doorway led down a short flight of stairs into the subterranean shop. Inside, it was dark, it was cluttered, the walls were lined with the eponymous paperback novels, the comics were huddled in the middle, and near the register there stood a rack of vintage porno mags. In short, it was absolutely the best place to buy comics for a 20 year old in college. (A year or two later, the shop actually moved above ground, in the same building, into a two-room unit, allowing a starker delineation between the comics and the more “adult” fare. I was happy for the store’s apparent success, but my heart will always be in the basement.) 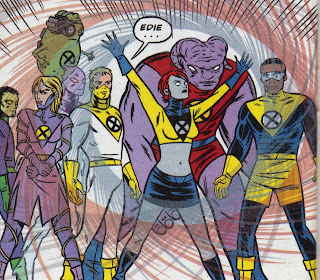 Without much idea of what had been happening in the various comic-book universes during my absence from collecting, once inside the shop I sought out those titles I’d enjoyed back in the day. A particular favorite of mine somewhere around the fourth grade had been X-Force, born from the pages of New Mutants and created by one of those figureheads of mainstream comics in the ‘90s, Rob Liefeld. Still associating his images with the title, you can imagine my surprise at discovering Mike Allred’s pop art illustrating a cast of characters I’d never seen before. Confused, I set the book down, purchased whatever other books I’d already decided on, and hurriedly made my exit.

Despite my first reaction, I was drawn to the book, intrigued by the wild mutation it seemed to have undergone, and when I returned to the shop the next week, I decided to dip my toes in the water, picking up the most recent issue, which at the time would have been a few numbers into the new creative team’s run.

It’s important to understand that I was concurrently taking a history of cinema class that had both introduced me to and made me fall desperately in love with the French New Wave, and particularly the work of director Jean-Luc Godard. After basking in the glow of films that were totally aware of and completely exploited the medium in which they existed, I immediately responded to Milligan and Allred’s vision of a super team motivated by fame and fortune, as though taunting the genre conventions that Marvel Comics has thrived on since its inception. And Allred’s art, with its deceptive simplicity and sort of inherent comicness (or, to borrow from T. Hodler over at Comics Comics, a bédesque quality), offers the perfect palette cleanser after Liefeld’s hyper-penciled grotesqueries. 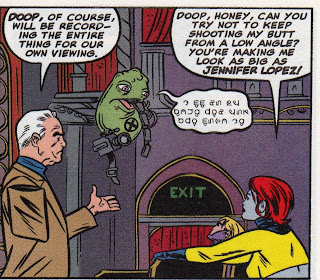 Unfortunately, I wasn’t able to trace Milligan and Allred’s work on the title all the way back to #116 with Discount Paperback Center’s racks alone, but with the combined help of Columbus’ other comic shop, The Laughing Ogre; my favorite shop in Cleveland, Carol and John's; and eBay, I managed to complete the collection. And once I finally had #116 in hand, I was surprised yet again.

While I knew Cable and his cohorts would be long gone, I didn’t expect an almost completely different set of characters than appeared in the very next issue, #117. Only four characters make it from the first to second issues under Milligan and Allred’s direction: U-Go Girl (Edie Sawyer), The Anarchist (Tike Alicar), Coach (the team’s then-manager) and Doop (my favorite--yes, favorite--character in the Marvel Universe). Everyone else in #116’s lineup--Zeitgeist, La Nuit, Battering Ram, Plazm, Gin Genie and Sluk--winds up dead by the last page. Dead. 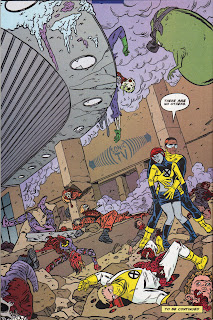 The stage is set for such a twist on page three, when the noodle-faced Sluk is blown to smithereens during a mission in North Africa (he’s quickly memorialized with an X-Force Café in Orange County), but a mission to save a boy band kidnapped by gunmen seems far from lethal at its outset. Nevertheless, in another twist on convention, even this issue’s narrator, Zeitgeist (a.k.a Axel Cluney), winds up literally eviscerated. This was a book where anything could happen, no turn of the page would be safe, the characters would face “real” consequences, and the promise of a comic-book resurrection was nowhere in the cards.

Reading this issue again, the boy-band element belies the comic’s age, as do some of the other pop-culture references here and through the rest of the series’ run. Nevertheless, the characters through the entire series pop off the page in a way I rarely find in mainstream comics where the “heroes” wear tights. Indeed, this is what I wanted--and still want--to believe Marvel (and DC, for that matter) is capable of. This wasn’t just re-treading the same old ground; this was giving the creators the freedom to really shake things up intelligently. (Of course, not everyone agreed, as evidenced in the heated debates that filled the series’ letters page. I could devote an entire post or more to said letters, but suffice to say they make it well worth tracking down the individual monthly issues as opposed to just buying the trade collection.) 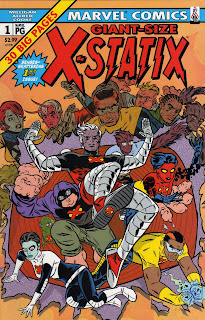 After #129, X-Force was restarted as X-Statix, which itself went on for 26 issues. Milligan was responsible for the scripts each and every month, while Mike Allred would occasionally catch his breath and allow such luminaries as Darwyn Cooke, Duncan Fegredo, Paul Pope, Philip Bond, J. Bone, Nick Craine and Nick Dragotta to tackle some of the art duties. Throughout, however, Laura Allred’s colors remained a constant, and were the perfect complement to this comic book that was gloriously aware of itself as a comic book.

Thanks as always for checking things out here at The Danger Digest, and please check back next week, when we’ll wrap up our celebration of the blog turning two with a new installment of the old “Page and Panel” column. Yo-ho!