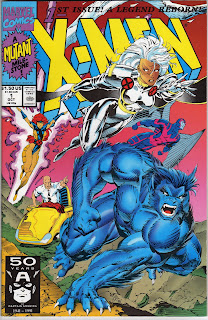 Jon D. Witmer—writer, holder of odd jobs, keeper of comic books. Carbon dating the origin of his love for sequential art back some two decades, Jon now mines the varied gems of his collection. These are his memories from the longbox…

“A mutant milestone!” proclaimed the cover. “A legend reborn!” Gasp! This was it—the book that at long last promised to meet my deepest yen, to assuage my comics jones, and with four variant covers, no less!

Opening to the first page of 1991’s X-MEN #1, a caption declares, “Stan Lee proudly presents the dawn of a new era!” A new era, indeed, and this time I was actually there from the get-go. To my naïve young mind, it seemed as though this title was made just for me.

When this book hit the stands, I was fast approaching double digits, making me old enough to consider myself a true-blue collector, and giving me the strong suspicion that #1 on a cover meant something—a suspicion shared by countless others and exploited capitally by the ruling parties of the day, god bless ‘em all. (Admittedly, I can still be a sucker for first issues, but with maturity has come at least some modicum of self-restraint, by which I mean my pocketbook is now tempered by the likes of rent, gas and electric bills, car insurance—you get the picture.) Likewise, I was of the age where I wanted the comic book equivalent of gut-wrenching METAL (screamed in my best hair-band voice), and who better to scribe such a saga and give rebirth to a legend than the man who had already rebirthed that very same legend some 16 years prior? 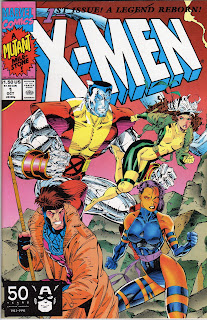 Chris Claremont is certainly a legend amongst the writers whose words have graced the pages of Marvel’s X-books, and by 1991 that status had been amply established. That said, in my youthful ignorance, I didn’t have a clue who the guy was. But I did know that whoever was drawing Wolverine could pencil a badass with the best of ‘em. Yes indeed, ever since reading X-MEN #1, Jim Lee has stood proudly in my mind as the quintessence of 1990s comic art (a title that, when first bestowed, I swear was a compliment). And sure, I was just as guilty as the next guy of loving Liefeld’s work back then, but the simple fact that Lee was on X-MEN kept him at the top o’ the heap.

Throwing their readers straightaway into the proverbial jungle, Claremont and Lee kick start the action, naturally enough, in space. A group of renegade mutants have stolen a spacecraft so that they can fly to Asteroid M and pledge allegiance to the Master of Magnetism himself, the inimitable Magneto. And when two more spacecraft arrive in hot pursuit, Magneto appears in the cold vacuum of space, sans helmet, and lays down the two-fisted street—er, space justice that he’s so adored for.

Think about that for just a moment. Magneto. In space. Without a helmet. Frickin’ hardcore. At nine years old, all I could think was, “Mom would kill me if I tried a stunt like that.” 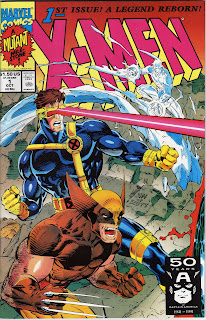 When we meet up with the X-Men, they’re taking full advantage of their suped-up Danger Room, battling one another in classic fashion. It’s all vintage Claremont—Wolverine on a short fuse, Cyclops frustrated with the feral Canadian, Professor X back from wherever it is he disappears to before returning with feelings of guilt over abandoning his wards, and banter aplenty (even banter about banter). All this goes on for some time as Claremont masks his characterization in the guise of Professor X seeking to reacquaint himself with his former students. “I need to learn the extent and nature of your individual capabilities, how you mesh as a team,” Charles says to Jean Grey; likewise, Claremont wants to ensure his readers are equally well informed.

Things get real again when Magneto arrives back on Earth to raise a nuclear submarine he’d previously sunk and take its ICBMs back up to Asteroid M, you know, as an innocent reminder to leave the man the hell alone. While he succeeds in this short-term goal, he only gets away after exploding one of the nuclear warheads in the upper atmosphere, an act that promises to foment all sorts of conflicts in issues to come.

Giving Claremont and Lee ample room to stretch their legs, the book has 37 pages of story plus a two-page center spread of the X-gang in their swimwear just to smack readers in the face with 1991. Along the way, we’re also treated to Nick Fury in a three-piece suit and later an outfit that looks suspiciously like it was “borrowed” from Cable. 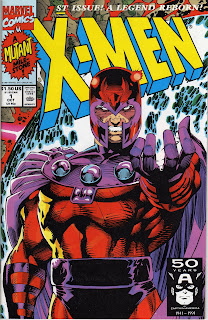 No discussion of X-MEN #1 is really complete, however, without some deeper mention of its four covers, which possess the super ability to be lined up next to one another and form an über-cover that screams “X-MEN X-MEN X-MEN X-MEN.” Depicting the whole gang teaming up on an apparently distracted Magneto, who ignores the children of the atom in favor of whatever it is that’s burning a hole in his hand, the complete image pays homage—with all the bombast the medium could muster—to the cover of 1963’s THE X-MEN #1.

Lastly, but of great significance to a nine-year old back in the summer of ’91, the back cover is not to be overlooked, with it’s ad for Toy Biz’s first line of X-Men action figures. The gang was a long way from being all there, but the lineup was pretty damn killer all the same—Nightcrawler, Storm, Colossus, Cyclops, Wolverine, Archangel, Magneto, Juggernaut, and Apocalypse—and the way they all run at the camera, it evokes GIANT-SIZE X-MEN #1 (only with some bad guys added to the mix in the spirit of camaraderie…or was it capitalism?). 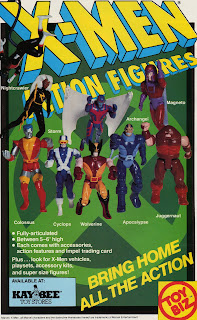