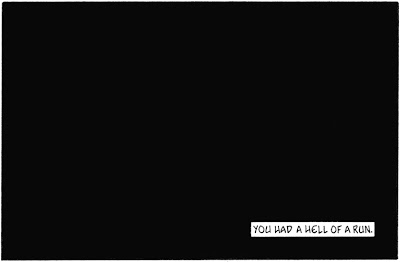 
And that was Pipe Dope. Before I ramble on for a spell, I want to thank my wife, Corinne, for being so damn cool with me spending hour upon hour hunched over the drawing table. Also, here's a look at the thumbnail's for this final week: 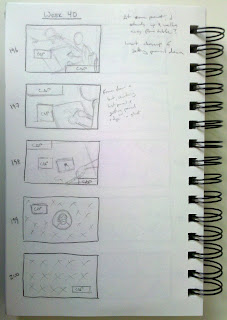 Now then. On to the rambling.

Pipe Dope was borne out of a number of ambitions, not least of which was the desire I've had for decades now to actually make comics. Growing up, I naturally enough felt that meant drawing X-Men or Batman, and at a certain point, I came to feel that my drawing chops wouldn't ever line up with the bar set by the pros working on those books. So I stopped drawing, and for a while even stopped reading comics.

After my freshman year of college, I was pulled back into comics, and began devouring a lot of the mainstream (i.e. superhero) books I'd previously missed. But what really blew my mind was a visit to the SPACE show in Columbus where, for the first time, I encountered self-published minicomics. (I met the late Dylan Williams of Sparkplug Books there, and picked up his incredible Reporter #1. The first minicomic I ever bought, and to this day one of my absolute favorites. You can buy it, and the complete Reporter series, at this link, if you feel so inclined--and I hope you do.) Suddenly comics was much bigger than I'd ever realized. Suddenly, it was something anyone could do. Something even I could do.

Around the same time, I encountered Scott McCloud's seminal book, Understanding Comics, and heard of the 24-hour comic challenge. I was primed and ready to make comics, and even accepted the 24-hour challenge (the result is here). And then, I got distracted. And just kind of stopped. Again.

After I'd been in California for a year or so, my drive to make comics was once again rekindled, but over the intervening years, I'd somehow managed once again to convince myself that I couldn't draw. Not really draw, anyway. But then, slowly, I started to remember the inspiration I'd felt upon discovering Reporter, and reading Understanding Comics. Eventually, I had the itch to pick up the pencil again, and began dabbling here on the blog. Then, a trip to APE in San Francisco back in '10 cemented in me the DIY jones. Further encouraging me was a chance encounter (at Burbank's own House of Secrets!) with Alec Longstreth's Phase Seven #011. Reading that issue was like reading my own story set in a parallel universe, one in which I'd never stopped drawing comics. Fortunately, rather than closing the book in a deep depression fueled by overwhelming thoughts of misspent years, it filled me with hope and spurred me to spend more and more time at the drawing board. Alec Longstreth is up there with Scott McCloud and Dylan Williams as one of my greatest comics-makin' heroes.

My time at the drawing board was still too scattered, and I knew I needed consistency if I was really going to improve. What I needed, I decided, was one long project that would keep me coming back to the drawing table day after day. And that's where the idea for a one-panel-every-day-for-a-year project came from. (Which, of course, was then modified to one panel every weekday, and then five panels per week--not necessarily weekdays, and not necessarily consecutive weeks, but still for one year.) As I've been packaging the first Pipe Dope minicomic collection, I like to think I have indeed improved. I see everything I'd do differently in those early panels, but I'm happy that the art grows with the story. Pipe Dope's about life, after all; it's only natural there be change.

Last but certainly not least, Pipe Dope stemmed from the need I've long felt to tell my dad's story. (As best I know it. More or less.) I could go into detail about how I broke the story down week by week, but I think I've been going on long enough, now. So I'll just say this about my dad: He was my best friend, and I want you all to know him.

Thanks for reading. More comics are on the way!
Posted by Unknown at 6:00 AM