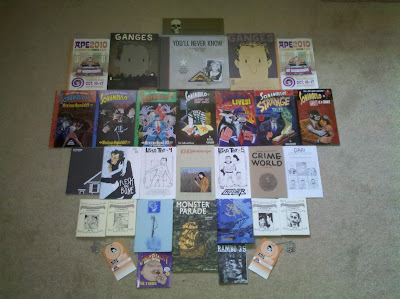 So, for the first time, I made the journey up to San Francisco to check out the Alternative Press Expo--APE for short. (That's my haul from the show, pictured above.) My fiancee and I walked the floor and sat in on panels and a workshop, and all throughout the two-day show I took copious notes, which I'll break down momentarily. The long and the short of it, though, is that APE is an amazing experience. The Concourse Exhibition Center oozed with the love of comics, and it was all wonderfully unspoiled by Big Hollywood and the Pop Culture Sideshow that's come to dominate the San Diego Comic Con. I was thrilled to be there, and I hope to make it an annual pilgrimage.

So then, on to my notes (edited to make sense).

First up, we checked out the Megan Kelso spotlight panel, moderated by Marc Weidenbaum. I won't lie, I haven't read any of Megan's work, but I was at APE to discover new (at least to me) comics, after all, and Kelso's crazy talented and tremendously smart about comics, to boot. It was great to listen in on her early toils with projects like Girlhero and the 10-year effort that resulted in Artichoke Tales. As she limned her comics career, she broke things down into an evolution of themes she's been alternately interested in and obsessed with, including feminism & politics, sex, Alexander Hamilton, homesickness, hiking, and "the mystery of adulthood." Her influences have included Julie Doucet, Jason Lutes, Jon Lewis, Ron Regé Jr., Brian Ralph, Matt Brinkman and the films of Yasujiro Ozu. She concluded by noting that her stories are a detailed study of ambivalence--a state she spends most of her life inhabiting.

Then, it was "The Bay Area Comics Scene Through the Years," moderated by Thien Pham and featuring a distinguished panel: Susie Cagle, Andrew Farago, Dylan Williams, Ben Catmull and Hellen Jo. Now, as Christopher Butcher noted in his coverage of this year's New York Comic-Con, it's perhaps unfair to judge a panel (or event) based on what you hoped it would be, but I'm not gonna let that stop me. I was hoping to walk out of this inspired to get some people together here in Los Angeles, empowered with a blueprint from these folks, all of whom I respect. Unfortunately, the panel mostly had an inside-jokey feel to it, a vague sense of reminiscence, and little concrete detail. We split a little past the halfway point.

Next on our docket was a spotlight on Daniel Clowes, in which the artist and his interviewer, Dan Nadel, dove deep into comics' history, both real and perceived. This was deeply inside baseball, so to speak, with questions such as "Gil Kane or Burne Hogarth?" "Mad or Cracked?" "Al Jaffee or Don Martin?" "Eric Stanton or Steve Ditko?" and "Wally Wood or Jack Kirby?" A lot of this was admittedly beyond my ken, and I'm sure my fiancee was likely bored to the brink of tears, but it was awesome nevertheless to listen to these cats just sit there and jam. I hope like hell that Clowes is able to realize his desire to someday present The Complete Eight Ball, replete with letters pages. Also, it was great to hear his story about "meeting" Ditko.

By far the best panel/spotlight/what-have-you I saw on either day was Lynda Barry's. Barry and her husband, painter Kevin Kawula, flew in from Wisconsin for the weekend show, and no moderator was needed as Lynda went through a slide show taken form her latest book, Picture This. Along the way, she defended Family Circus, talked neuroscience, inspired my fiancee to start drawing, and kept the room in stitches with one hilarious line after another. If you ever have the chance to hear to her speak, drop everything you're doing and by god, man, listen! She took us back to that proverbial day when everyone "learns" they "can't" draw, and she replaced that memory with instructions for drawing chain-smoking, trash-talking turkeys. It was glorious.

Unfortunately, the great height of Lynda's talk was followed by the depressing low of Tony Millionaire's spotlight, in which the artist fielded a series of pre-selected, mostly non-comics-related questions from Renée French. The queries, such as "did you ever splatter the blood of an enemy on a friend's walls?" essentially gave Millionaire a chance to talk about fighting and fucking. Entertaining stories, to be sure, and they'd be great to hear at a bar, but again, it's not what I was hoping for. A bit more about technique and process would have been welcome from the man, whose work I do greatly admire--Drinky Crow is one of my favorite comics characters of all time.

We wrapped up Saturday's festivities (following dinner at the delicious Bossa Nova on 8th Street--I highly recommend it; the mashed potatoes may well have been the best I've ever had, and I'm something of a mashed potato connoisseur) at the Isotope (The Comic Book Lounge, pictured below), where the shop's proprietor, James Sime (second photo below, holding award, dressed to thrill), presented this year's Isotope Award for Excellence in Mini-Comics to Pete Hodapp for his fantastic The Possum and the Pepper Spray. (Go to his blog and buy his stuff. Now!) 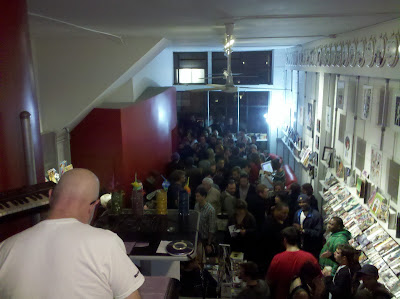 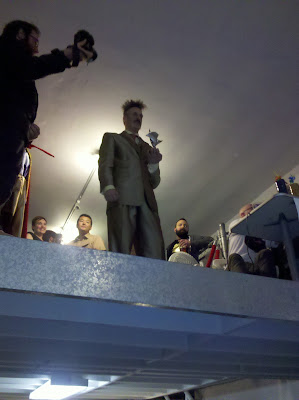 To kick off APE's second and final day, we ventured into the workshop area (admittedly a bit noisy, situated near the check-in tables and looking pretty slapdash) to glean from marketing's master, Larry "Beanworld" Marder, who laid it down with "Marketing a Comic That's Easier to Read Than to Describe." Marder walked our small group step by step through his own marketing efforts from back in Tales of the Beanworld's earliest days, and while the Internet has changed things somewhat since then, the examples shared nevertheless gave me ideas aplenty for getting the word out about my own projects. We almost skipped this, but boy howdy, I'm glad we didn't.

"The Art of Storytelling" served up a second helping of Lynda Barry, this time joined by Renée French, Megan Kelso, Tom Neely and Jen Wang. Moderated by Greg Means, the panel was ostensibly about the role of art in comics storytelling, and while it kind of touched on that, a highlight was the discussion about what the panelists hate to draw and go to great lengths to avoid. (French went to great lengths in her older work to avoid drawing hands, having her characters casually position their arms through doorways in order to minimize her contact with their digits.) Another great nugget, which Kelso learned from Kim Deitch: When you're stuck artistically, take the setting of the story point at which you're stuck and draw it in tremendous detail, and eventually your brain will power through the block.

After that, Gary Sassaman interviewed Rich Koslowski. It was an interesting discussion that touched on Koslowski's mainstream work as well as his graphic novels for Top Shelf, and it was also noteworthy for speaking in glowing terms about working for Archie Comics. I'm not sure I'd ever before actually heard someone talk about working for that company, but man oh man, they've been pumping out comics consistently for a long, long time, and god bless 'em for giving Koslowski steady employment.

The last panel we hit was the "Indie Comics Survival Guide," moderated Keith Knight. Despite the panel's composition--Stephen Notley, Matt Bors, Barry Deutsch and C. Spike Trotman--it was ultimately a bit of a disappointment, as Bors, Deutsch and Notley (especially Notley) got little mic time. As interesting as Spike's impressions of Kickstarter.com are, I would have liked to have heard more of what the rest of the panel had to say.

All the same, I left APE jazzed, encouraged and totally inspired. We didn't see everything--for a much fuller view of the APE experience, I recommend poking around Tom Spurgeon's archive of links--but everything we did see pointed to the same conlcusion, and our new motto here at The Danger Digest: Comics is alive, and anything is possible. Yo-ho! 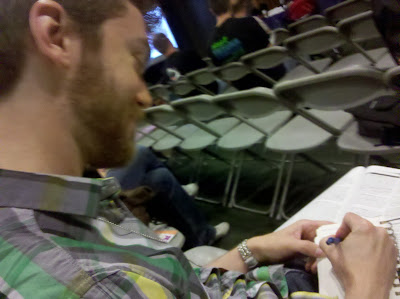