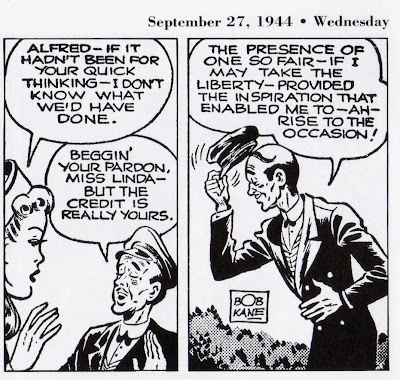 Alfred's ribald shenanigans from the Batman and Robin newspaper strip, originally published Wednesday, September 27, 1944. Written by Alvin Schwartz (under the pen name Vernon Woodrum), penciled by Jack Burnley, inked and embellished by Charles Paris and lettered by Ira Schnapp. Scanned from the book Batman: The Dailies 1943-1946, published by Sterling Publishing Co., Inc., by arrangement with DC Comics.
Posted by Unknown at 6:00 AM