Portland, Oregon, that is. Yes indeed, after wanting to get there for a good many years, this past weekend finally afforded an excuse to make the trek, and in every way possible the city met or exceeded my expectations of greatness. In recent years, I've most wanted to go because of Portland's reputation as a real hub of comics-lovin' and comics-makin'. To put that reputation to the test, on my final day there, with nothing scheduled except for the 7:50 p.m. flight from PDX to BUR, I gave myself the comics-shops tour of the town, which I'll break down for you presently. But first, to give you a sense of the success of this outing, here's a look at my haul: 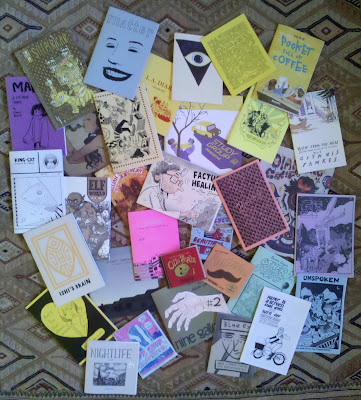 My first target was Reading Frenzy--but lo! I hit the streets before the shop was open. So, I actually first stopped into Powell's City of Books, which would be a great place in which to lose yourself for a day (or more). As it was, I only stayed for about 20 minutes before walking back to my first intended target. But, on my way, I glimpsed Counter Media and quickly jumped inside. I didn't have much time to stray from my list of pre-selected shops, so my stay was brief, but this shop looked terrific, with a great selection of alternative and underground comix (yes, with an "x").

My detours done, I finally made it into Reading Frenzy, and sweet bananas was it worth the wait. A cozy room, well organized and yet jam-packed with self-published greatness. Minicomics galore. Zines galore. I could be talked into moving to Portland for this store alone--but there was more goodness still to come!

Since I was still in the downtown, City Center area, my next stop was Floating World Comics, where Frank Santoro recently presented one of his Comic Book Layout Workshops. (Wish I coulda been in town for that!) This store is perfect for the weekly comics fix and so, so, SO much more, and I dropped a lot of cash on local minis and other books I haven't been able to find down here in Los Angeles. Boy howdy, do I wish I could stop in on a regular basis. Making this pit stop better still, Jason, the shop's proprietor, was behind the counter, and graciously took a few copies of Pipe Dope off of my hands. Thanks, Jason!

Next, it was time to jump aboard a bus and trek across the river to Excalibur Comics, which is home to perhaps the greatest selection of back issues I've ever seen firsthand. I had to be very, very careful not to dig too deep, for fear of trying to navigate the city and then fly home with a longbox full of Marvel Team-Up. (On a sad note, this is also the shop where I learned of Moebius' passing. Fare thee well, Jean Giraud--and thanks for everything.)

The next stop turned out to be a misfire, as Guapo Comics (and coffee, too, according the website) no longer exists. Major bummer, that; I was really looking forward to a hot cup o' joe complemented by a nice, cool read. Also, next door was The Bad Apple, but they had a sign posted alerting any would-be customers that they were "closed due to molasses." Fair enough. Sorry I missed you!

But all hope was not lost! I caught another bus and landed just about a block away from Cosmic Monkey Comics, which is now right up there with Floating World as one of my favorite shops in any city. Once again, I came away with a lighter wallet and a heavier bag, as the selection of minicomics was nothing short of mouth-watering. (A second room full of back issues was also tempting, but I didn't let myself do more than peek inside.) Here, a terrific gent by the name of Andy was manning the register; he took a few copies of Pipe Dope to sell in the shop, and he also helped me Google some other shops in town I wasn't already aware of. Thank you, Andy!

Sadly, time was of the essence--the clock was ticking, and my flight was getting ever closer. I figured I still had time to squeeze in Bridge City Comics, and I did--but just barely, because like a knucklehead I jumped on the wrong bus and then had to sit around for 20 minutes to catch the bus going back in the direction I was originally supposed to be heading. There's a lesson there, somewhere. Anyhow, Bridge City proved to be yet another great shop in a city of great shops, well curated and with a terrific selection of minicomics and mainstream titles alike. Portland really has it going on!

In short: Many thanks to all the great shops in Portland, and especially to Floating World Comics and Cosmic Monkey Comics, both of whom are now selling Pipe Dope #1!

Up next: WonderCon! It's happening this weekend in Anaheim. I'll be there Friday and Saturday for sure, and possibly Sunday, too. And if the stars align, I'll hopefully have a wrap-up report to post here next week.