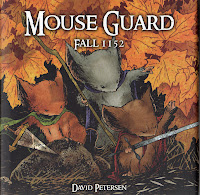 
I do indeed recognize that I should have, before now, begun my journey through Neil Gaiman's Sandman, but as often happens with the classics, I set them aside knowing they'd always be there. And while it does indeed appear they aren't going anywhere--DC just released yet another softcover edition of a number of the volumes--I do feel the fool for having not picked them up sooner. They're every bit as brilliant as people say. Sam Kieth, Mike Dringenberg, Malcolm Jones III et al. bring Gaiman's scripts to life with artwork that seems to be energized by Dream itself, and they consistently come up with stunningly original layouts that always enhance the story being told without distraction.

Meanwhile, I've continued devouring Archaia's catalog, at last reading the first Mouse Guard volume and also taking home the recently released Syndrome. Both of these books are highly recommended, and they serve as great examples of just how diverse this company's output is--the oversized (roughly 7.75"x11.5") Syndrome explores the darker facets of our human nature with a story about a no-holds-barred pursuit for a "cure" against evil, while the square-format (approximately 8.25"x8.25") Mouse Guard presents an all-ages (in the best sense of the term--it can be appreciate by anyone of any age) adventure story pitting Medieval mice against the entirety of the world around them, and against some of their own, as well. Mouse Guard is also richly illustrated by its creator and writer, David Petersen, and Syndrome introduces the extremely talented David Marquez to the Archaia fold; he's currently working on the company's second Days Missing miniseries.
Posted by Unknown at 6:00 AM

Email ThisBlogThis!Share to TwitterShare to FacebookShare to Pinterest
Labels: Bag It and Board It, Mouse Guard, Syndrome, The Sandman